Posted on 4th August 2016 by Adam Ellis in Featured, Features, In the Golf Paper | 0 Comments 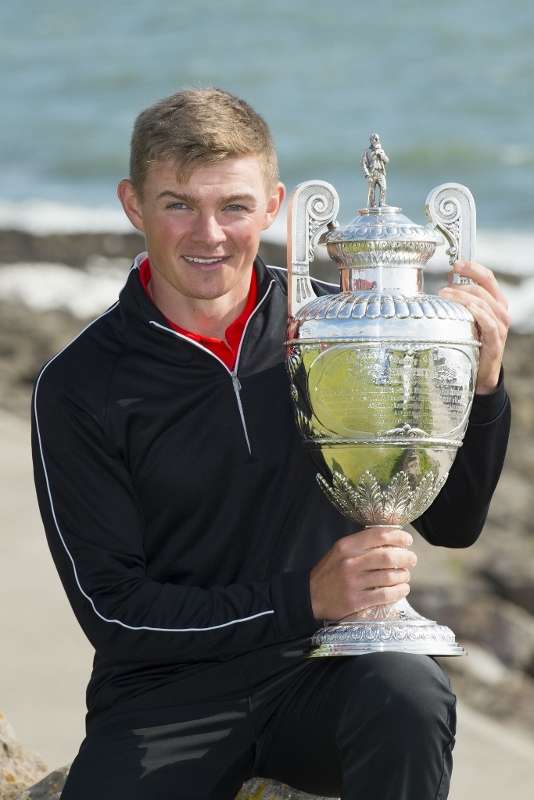 Scott Gregory must dream that one day he will earn millions from sponsors and victories in golf’s Majors and be able to afford to use a private jet to travel to tournaments as the likes of Tiger Woods and Ernie Els did in their prime.

That is because the hectic schedule that he is following in the ­aftermath of being crowned ­Amateur ­champion has ­involved two burdens that those ­superstars would ­probably not have heard of, let alone experienced.

On the Saturday morning, after missing the cut on his Open debut at Troon, he drove from the Ayrshire coast to his home in Hampshire.

Within 24 hours he was on the road to the Prince’s club in Kent to prepare for playing four rounds in two days for GB&I against ­Continental Europe in the St ­Andrews Trophy.

And leaving there after a high-pressure match ended in a

12½-12½ draw that saw him and his team-mates fight back from going 4-0 down after the first morning’s play, Gregory had one day at home before hitting the road again.

On Saturday he drove from Hampshire to the North Yorkshire coast to start preparing for the English Amateur Open that began at the Ganton and Scarborough South Cliffs clubs on Monday.

He did so knowing that were he to qualify from the preliminary strokeplay rounds and battle through the matchplay stages to reach the finals, it would involve playing another five rounds.

“At least after that,” said the 21-year-old from the Corhampton club, “I will be taking a week off but then I will be on a plane to fly to the US Amateur Championship at the Oakland Hills Course in Detroit.”

He admits that all the travel had taken a heavy toll on his bank balance given the R&A’s strict amateur-­status rules.

All the help that he has been able to accept has been from ­equipment manufacturer Cobra, which provided him with a pro golf bag complete with his name on for The Open.

“I am just using up the money that I ­managed to save during the winter working behind the counter at a golf shop in Portsmouth,” said Gregory.

“But it’s been worth it. I really enjoyed the St Andrews Trophy, it was played in incredible weather with the temperature reaching 30 degrees on the first day with winds gusting up to 25 miles an hour while the second day was flat calm.

“And although we went 4-0 down on the first morning, it wasn’t that we played bad golf, it was just that we came up against people playing better in those matches.

“We had hoped to do ­better in the first set of singles matches but after them we had a little chat about it, everyone got pumped up and we fought back well to get the draw and retain the trophy.”

Gregory took three points out of a possible four and said that each of his four matches were basically watched by only a handful of people. But there were decent crowds of friends and relatives following his teammate Alfie Plant, a native of Kent. 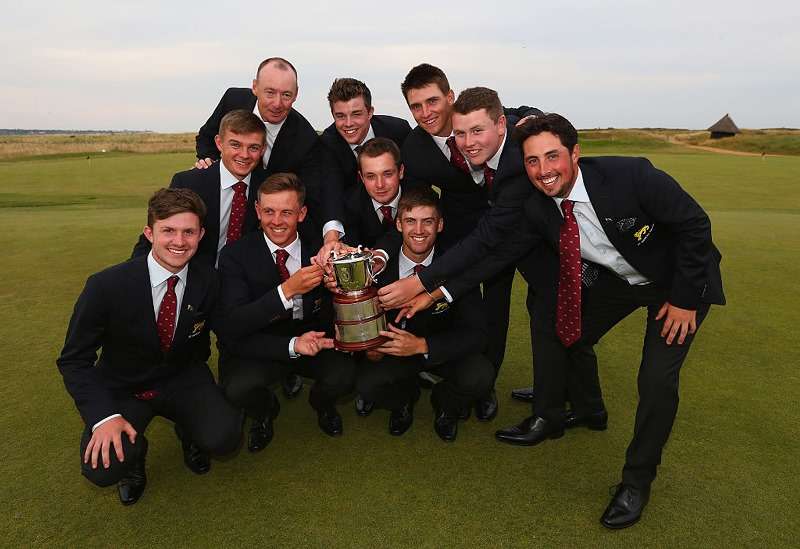 Hands on the trophy: GB&I retained the silverware with a draw (Photo by Getty Images)

Scotsman Craig Watson, who was captain of the GB&I side, was full of praise for the way that his ­players fought back after ­suffering their opening-session ­whitewash.

He said: “I’m absolutely ­delighted with the result, ­especially after yesterday’s 4-0 ­result in the first session. It was ­always going to be difficult and the boys were disappointed to only draw 4-4 in the first ­afternoon’s singles.

“We got off to a good start today and the boys dug in well with a tremendous performance after being four down and ­knowing we had to take ­something into this afternoon. We continued where we left off and the boys were brilliant.”

Trailing their opponents 8-4 at the start of the second day, ­Watson’s side won three of the morning foursomes matches and halved the other to reduce ­Continental Europe’s lead to a single point at 8½-7½ going into the afternoon singles.

Ireland’s Stuart Grehan led from the first hole against Luca Cianchetti and was comfortable against the Italian, closing out the match with a birdie on the 15th for a 4&3 win to put GB&I back on level terms at 8½-8½.

Gregory edged GB&I in front for the first time after beating Jeroen Krietemeijer by two holes to make it 9½-8½, only for the visitors to take the lead again after a 2&1 win for Sweden’s Robin Petersson over Grant ­Forrest, followed by Stefano ­Mazzoli’s victory by one hole against Irishman Jack Hume.

Continental Europe’s lead was soon stretched to two points when Frenchman Victor Veyret picked up three holes in a row from the 14th to seal a 3&2 ­success against England’s Jamie Bower.

Connor Syme and Austria’s Matthias Schwab halved their match for a share of the spoils to leave Continental Europe needing only one point to win the match outright.

But Plant pulled a point back for GB&I with a 4&3 win over Mario Galiano and, after Robert MacIntyre and Guido Migliozzi halved their match, the ­destination of the trophy came down to the result between David Boote and Ivan Cantero Gutierrez.

The Welshman retained his composure and secured a par on the 18th to beat the Spaniard by one hole, gaining the crucial point to secure a 12½-12½ final score and ensure that GB&I ­retained the St Andrews Trophy as holders.