Posted on 5th September 2016 by admin in Featured, Features, In the Golf Paper | 0 Comments 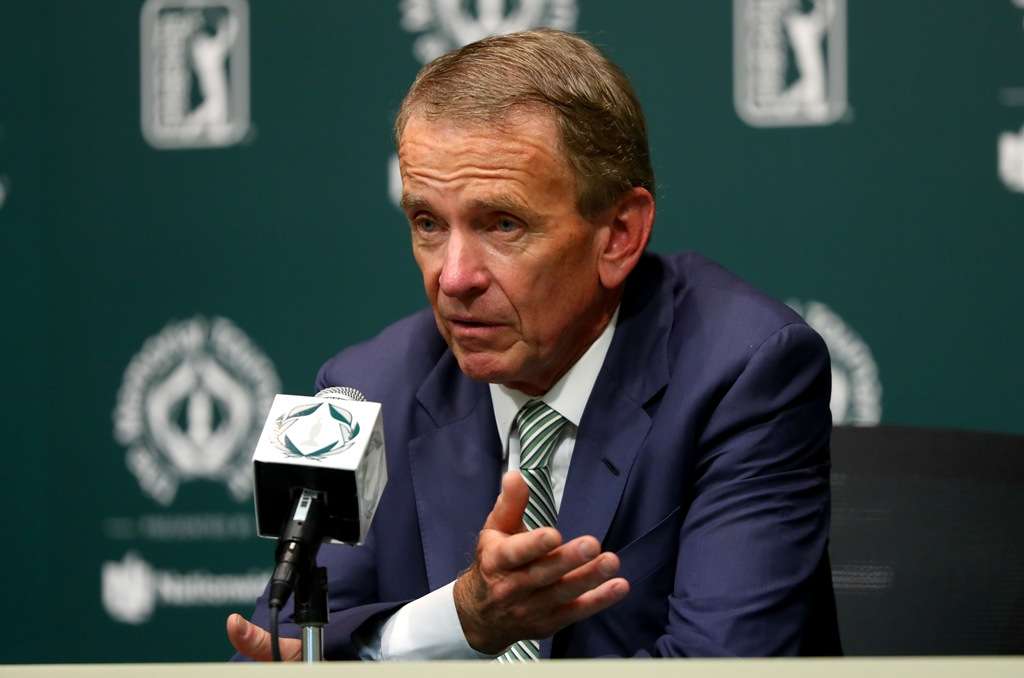 Sometimes it is difficult to know where to start with a column like this. When there are so many negatives surrounding an event – or in this case, a series of events – ranking the worst aspects in some kind of sensible order is no easy task. And so it is with the PGA Tour’s end-of-season “extravaganza,” the four-tournament run known as the FedEx Cup play-offs.

Essentially a mindless money-grab (remember who won in, say, 2014? Me neither) and, especially this year, the owner of an over-inflated sense of its own importance, it represents professional golf at its most shameless.

Think about this. When it became clear that the USPGA Championship had to switch its date because of the Olympics, the PGA Tour’s bully-boy commissioner, Tim Finchem, refused to move the FedEx Cup and so created the ludicrous situation where the Open and the PGA had to be played a week apart. Stunning arrogance.

Back in the day, before the PGA and European Tours expanded to cover 51 weeks of every 52, the gap between golfing years was filled by the so-called “silly season”. Events like the “Shark Shoot-out,” the “Skins Game,” the “Wendy’s Three-Tour Challenge” and the “Father-Son Challenge” dotted the landscape like pimples on Miss World’s nose. None added anything to golf’s rich history, only many dollars to the bank accounts of the already wealthy.

Still, none of the above ever stops the PGA Tour’s formidable PR machine from churning out some laughable gems. During last week’s Barclays event at Bethpage Black on Long Island, the FedEx Cup was described as an “integral part of the golfing landscape.” Rickie Fowler was quoted as saying, “the ultimate goal for the year is to be in Atlanta (for the climactic Tour Championship) with a chance to win the FedEx Cup.”

Amusingly, that last bit was exposed as mere propaganda when Fowler, in the wake of his opening round, was asked how much next month’s Ryder Cup is on his mind. “One hundred per cent,” said the former Players champion. “All of it. That’s the number-one priority coming into the year. Even in the off-year I’m thinking about it. That was the whole reason I played last week (at the Wyndham Championship), to get more points.”

Quite. And Fowler is not alone. Patrick Reed was also clear on his priorities. “Of course, the Ryder Cup is on my mind,” said the star of the well-beaten side at Gleneagles in 2014. “For us, it’s about getting sweet revenge. I played some great golf two years ago. But our team didn’t win. So we need to go out and keep the cup in the States.”

That apparent disdain from two of the PGA Tour’s bigger names stems partly from the fact that the FedEx Cup is only ten years old.

It takes time to build an aura of importance, even if the veneer is invariably far from deep.

Years ago, standing under the famous tree in front of the Augusta National clubhouse, the legendary Sam Snead was heard to comment that playing in the Masters was like ­walking around in church, such was the reverence demanded by the ­green-jacketed membership.

“But,” said Snead, “if you came back here next week for the ‘Screen-Door Open’ you would need to shoot 18-under par just to get into a play-off.”

A good point. Shorn of history and prestige, golf tournaments are not much more than earning opportunities for top players. And nothing has changed; the FedEx Cup is the 21st century’s Screen-Door Open, even more so when money means less to the game’s elite than ever before. Let’s face it, when players are happy enough to skip elements of the play-offs – as Sergio Garcia did last week – how important can they really be?

Hence, while the likes of Tiger Woods (twice), Vijay Singh, Henrik Stenson and Jordan Spieth have hoisted the FedEx Cup skyward, lesser luminaries like Bill Haas, Brandt Snedeker and Billy Horschel have done the same. Some competitive (or otherwise) aspects of the Fed-Ex Cup are also highly questionable. Last year, by way of example, Spieth missed the halfway cut in both the first and second events. Yet still he emerged as the eventual winner. Beat that for perversity.

The problem is that golf does not readily lend itself to a “play-off culture.” By their very nature, play-offs have to be knock-out matches. The FedEx Cup tries to replicate that essential element by working its way down from 125 players, to 100, to 60 and eventually to 30. But when those at the top of the pre-play-off rankings are already guaranteed places in the final event, any tension is at best contrived. Thus, despite the PGA Tour’s best efforts to “sell” it as such, the FedEx Cup is no Ryder Cup and never will be.

Indeed, much of the tour’s efforts to create something that will interest and engage the best players is largely the result of an inherent inferiority   complex. Much to the chagrin of the diminutive Finchem, the five biggest events in golf are all outside his autocratic control. The Masters (Augusta National), The US Open (United States Golf Association), the Open (the R&A), the USPGA Championship (PGA of America) and the Ryder Cup (PGA of America/European Tour) are all administered somewhere other than the PGA Tour’s Sawgrass headquarters.

Bereft of tradition, Finchem is forced to “bribe” the leading professionals with filthy lucre. But that, as we have seen, is less and less of an incentive to men already awash with cash. Which is not to say it doesn’t work to an extent.

The argument that professional sportsmen are ever going to completely turn up their noses at money is hard to make. So, at least for now, we are stuck with contrivances like the FedEx Cup.