Carin Koch: Week must be remembered for fine golf

Posted on 29th September 2015 by Adam Ellis in Golf news, In the Golf Paper | 0 Comments 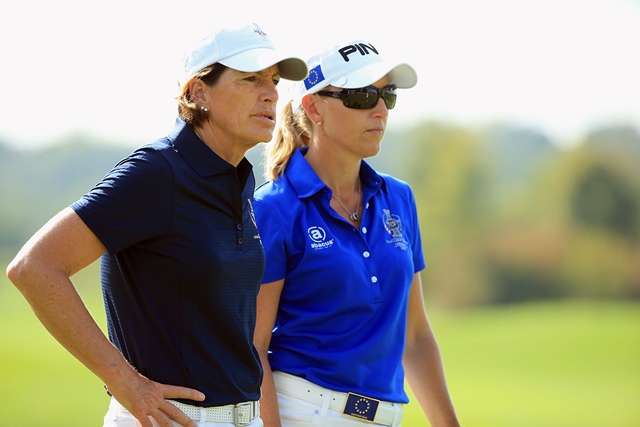 The Solheim Cup is a week filled with excitement and drama. Numerous official functions, mixed between practice rounds and media engagements, it is a busy week.

Following on from the final day of this year’s Solheim Cup at St Leon-Rot, one significant element about the Sunday singles has been largely overlooked.

That was the wonderful quality of the golf played by both teams, and especially the Americans as they won the session 8½-3½ to win the trophy back. It was just fantastic, and both teams played their hearts out.

The American team’s margin of victory in the singles was large, but for much of the afternoon it could have been Europe’s day as well. We had a couple of chances to finish off games and win, but in the end they sank more key putts.

Over those 200 holes played during the singles session, the players on both sides made a total of 112 birdies and three eagles – need I say any more except to be, obviously, disappointed that the Americans contributed more of them than we did.

Much of the comment on the Solheim Cup has centred on the final fourball, which returned to be completed on Sunday morning.

I understand why, but it is unfortunate for the reasons above and for the fact that Suzann not only went to see American captain Juli Inkster, but also told the world about her feeling of sadness in an apology she posted on Instagram.

I feel this was the correct course of action by Suzann and I gave her my full support in doing so.

This should not overshadow the Solheim Cup as there are so many positives to take from the week. Credit should be given to Team USA and Captain Juli. They played fantastic golf, which created so much drama and excitement. From a European perspective Charley Hull and Melissa Reid both had outstanding weeks.

One of the questions I was asked on Sunday night was whether after this edition I would be interested in doing the captain’s job again at Des Moines in Iowa in two years’ time. That’s not up to me; it is a decision that will be made by the Ladies European Tour.

What I can say is that I loved the week. I had so much fun with my players and I really felt the team were great together. It’s a little early to say whether I would want to do it again but… maybe.