Chris Wood column: I can sense the Ryder Cup in the distance after BMW PGA win

Posted on 6th June 2016 by Adam Ellis in Features, In the Golf Paper | 0 Comments 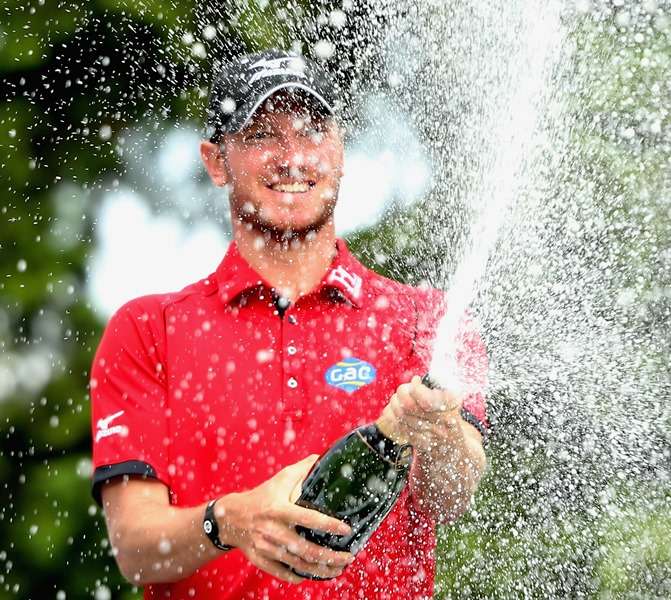 I don’t make a habit of ­studying the world rankings  at the end of a tournament, but after winning at ­Wentworth on Sunday it makes interesting reading for me. It has been hard to describe exactly how I have felt since sinking that two-foot putt on the 18th green to win by a shot because there has just been so much to take in.

For the biggest win of my career so far has certainly changed so many ­statistics. I now find myself in 22nd place in the world rankings, and, after ­picking up my biggest prize, I am now fifth in this year’s Race to Dubai money list. And what could mean most to me is that I am now third in the money list table that will provide four automatic places for Darren Clarke’s Ryder Cup team in September.

Making my debut has been my goal since I got off to a good start when the qualification period began late last year and now that ambition is within touching distance if I keep my form going over the next couple of months.

And with starts assured in all the big-money events like the US Open and The Open that are coming up, I have a great opportunity to make the team.

On top of that I could be in with a shout of earning a place in the GB team that travels to Rio de Janeiro for the Olympic Games in August.

At the moment Danny Willett and Justin Rose appear to have sewn up places for themselves since they are both in the top ten of the Games’ ­separate world ranking table, which will provide the 60 players competing for the gold medal.

But I must have got closer and while I did talk briefly to Jamie Spence, Britain’s Olympic team leader, this year about the Games, now I am hoping to hear from him again about filling in accreditation forms and all that sort of stuff.

But if I do make it to Rio I am going to have to make one big personal change away from the golf course because I have plans to hold by stag party during the fortnight when the Games are on.

I suppose I could hold it in Rio since a lot of my golfing friends will be out there – but one thing is for certain,  I am not going to change the date of my wedding, which is planned for the week after the Games are over.

And talking of my fiancée, it was a great feeling at Wentworth to walk off the 18th green and through the stands to the recorders’ hut to find Bethany, my parents and a group of friends waiting for me to give hugs and ­handshakes.

That was special because had such a big victory arrived in the Middle East or China, all I would have done after the prize-giving would have been to pack my bags and head for an airport to get a plane home.

Going back to statistics, some might question the fourth-round 69 that I shot because I covered the first nine at Wentworth in 29 shots, equalling the PGA Championship record, but came home in 40.

But there were two key issues in the round. On the front nine, as I said to my caddie, Punk, I just seemed to set up the perfect yardages for all my approach shots into the greens, so I was able to attack the flags.

On the back nine, the closing six holes were set up really tough and I was really pleased that I flushed my drives at 13, 15 and 17, which was absolutely vital. Yes I dropped some shots, but that didn’t play on my mind because I knew it wasn’t going to be easy and just made sure that I stayed focused.

Has the win taken my career to a new level? As far as I am concerned I am still going to be the same old Woody and I just have to keep doing on the golf course what I have always done, and around me I have a great coaching team.

My long game has been in good shape for most of the year thanks to the work that I have been doing with Mike Walker and Phil Kenyon.

But I think one of the important areas of my play at Wentworth was the work done recently on my short game with Paul Mitchell, who was my ­original coach in Bristol when I started playing the game.

Around the greens I felt a lot more comfortable and if that continues for the rest of the summer then the ­ambitions of playing in the Ryder Cup and the Olympics could be achieved.

*This article was originally published in TGP on 1 June 2016.