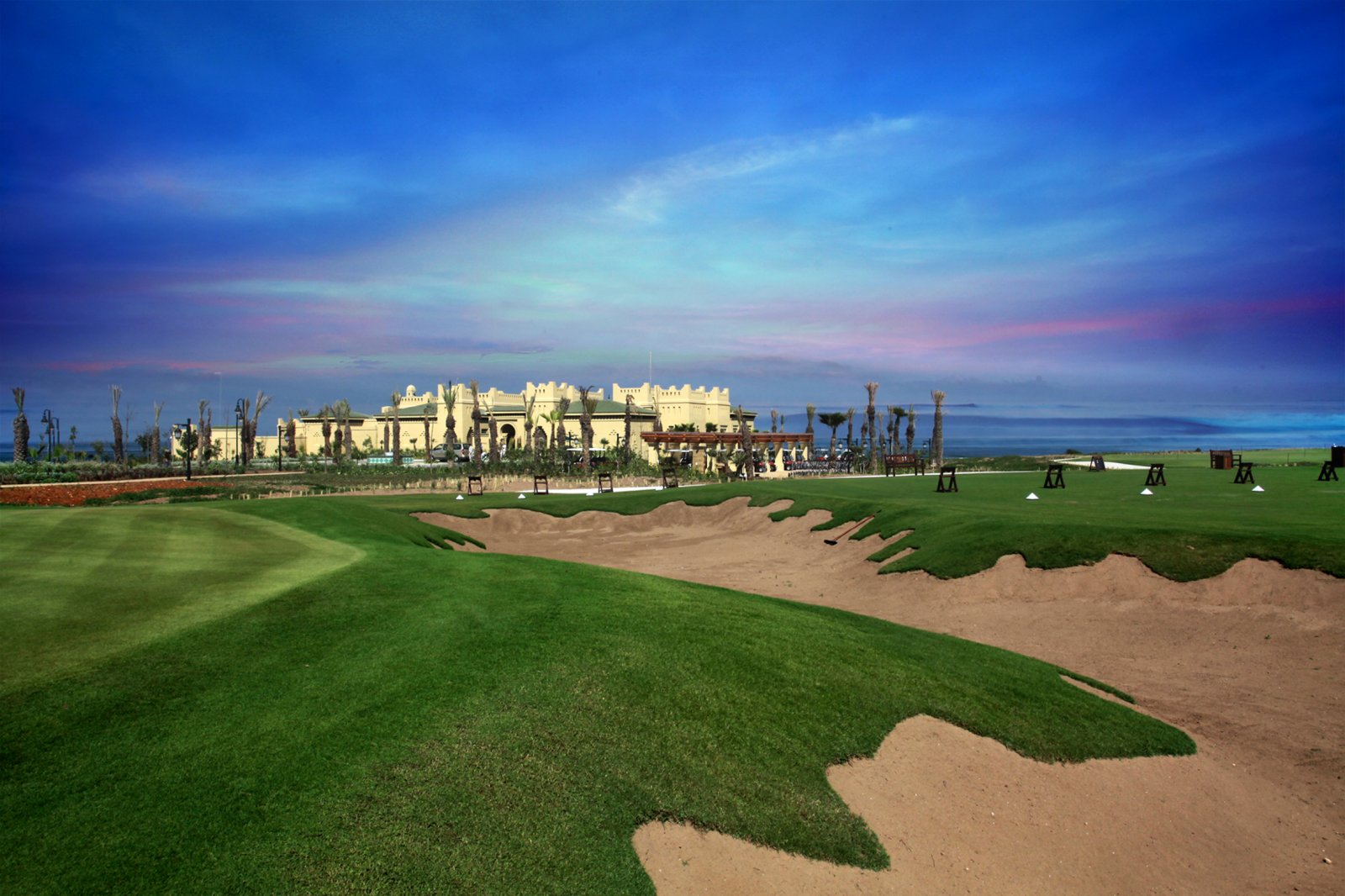 The wind whips in from the Atlantic and the big rollers have attracted kite surfers who dance across the white caps as we bend into the breeze and try to come to terms with links golf Moroccan style.

There are times when you could just be on a British links course on a warm day but when I was there it was more like one of those afternoons which promises much but pinches with a wee chill and has enough bite to push the ball towards the bushes.

This is Mazagan Golf Club at the beach resort of the same name, 60 miles along the coast from Casablanca which has had over £200 million invested since it opened in October 2009.

The course and a superb clubhouse are alongside the gated beach resort which has 500 room and 67 private villas. You can walk it in 5 minutes but the hotel provides transport by golf cart or car on request.

Designed by Gary Player, Mazagan is a challenging affair, particularly if you opt to play the black tees, the longest, which takes the par 72 to a sapping 6885 metres to claim the title as Morocco’s longest.

With another Scot, who also understood how long, tiring and frustrating a links course can be on a squally day, we opted for the gold tees which take you 93 over 6000 metres and it was a decent test.

With ten par 4s, and a even split of par 5s and par 3s, the course winds along the beach, at times the the sand and the dunes being used to good effect for landscape and dramatic effect.

Perhaps the thing that surprises most is how well kept and green the course is. The rough can be pretty unforgiving with a tangle of bushes and high grass while the bunkers are many and deviously positioned.

The coastal climate helps but Mazagan’s rolling fairways are irrigated with recycled water, 80% of it from the hotel, something to ponder as you soak away the aches in the room afterwards, and, I was assured, the course remains lush throughout the year even when the temperature hits 100F.

The Paspalum grass is not the tight carpet weave, that we are more used to on British links, tending to disintegrate on deeper impact but the greens were decent and offered a few lines which only Player could have conquered.

The fairways are wide in most cases but there is no first cut and if you wander wide then a succulent, wrist-breaking shrub known locally as witch’s fingers, welcomes the ball.

The first nine take you away from the beach to a calmer, undulating area but from the turn you are into the prevailing wind with the sound of the surf cheering you home to clubhouse where you can relax in the bar restaurant or at the luxurious sp which has 19 treatment rooms.

There’s a 300 metre long golf range with plenty of bays, a teaching academy and staff who have the latest technology available to analyse your game and make adjustments.

Mine is beyond repair for a two day fix so we persevered on different days which offered the extremes of blustery conditions and a hot sun which was made golf easier but definitely required a buggy to carry the cool drinks and provide some shelter.

The Mazagan resort, which caters for all ages, offers a range of prices which include golf breaks but their 18 hole rate in mid-winter is around £50 but they will do a round a club hire for about £75.

The resort, right alongside, is a great base. With six restaurants offering a wide range of food from North Africa, Midle East, India and even sushi,  there is plenty of variety.

The Chiringuito Beach Club provides drinks and snacks on the sands  and you can always work off some of the weight at the Fitness Centre  which has Pilatesd instructors, personal trainers and yoga sessions.

A kids club, a proper karting track and horse-riding are just a few of the many other activities available.

Having gambled on a few putts – and lost- there is also Morocco’s largest casino in the hotel which is has surprisingly little impact on the ambience of the huge, airy atrium.

The rooms are very spacious, equipped with internet, wifi and air-con and if you can get one with a view of the white sandy beach and ocean, so much the better.

The King of Morocco is behind the project which has been created by South African hotel mogul Sol Kerzener, who was behind the Sun city development and his Atlantis brand includes the multi-billion Palm leisure and residential development in Dubai.
For me, the course is the attraction. It was never particularly busy during our visit and the beautiful little par 3 15th where you seem to be hitting the ball straight into the sea remains a fine memory.

Ok, I did manage one birdie on the way to a windy 90, but it’s less than 3 hours flying time from London, I can improve and one day I will follow the Casablanca movie line and “Play it again.”