Posted on 13th September 2016 by admin in Featured, Features, In the Golf Paper | 0 Comments 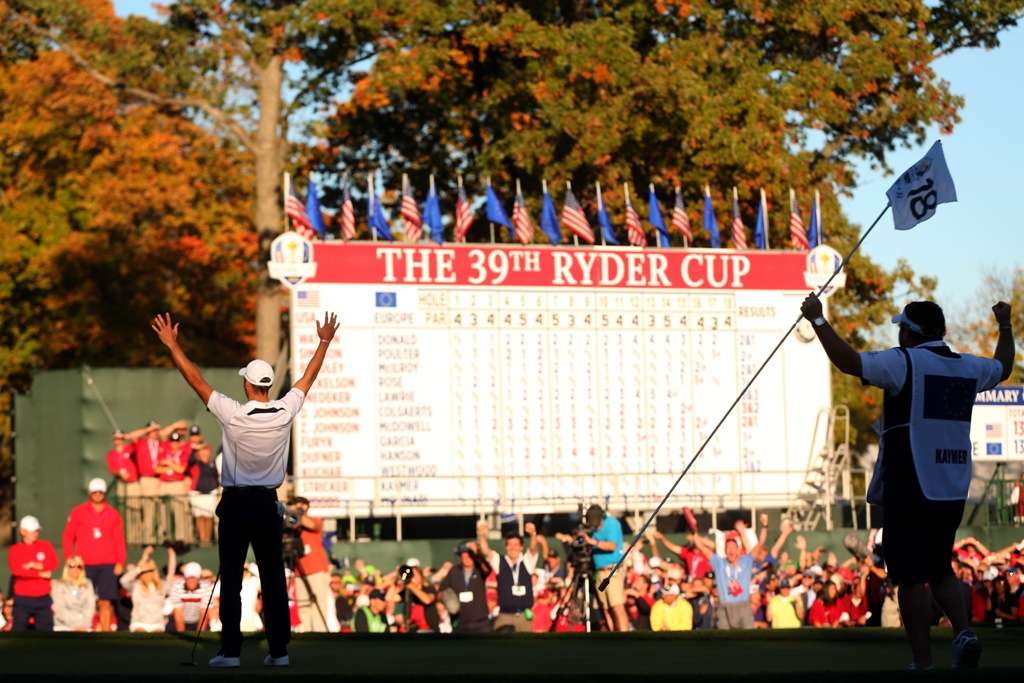 Done it: German Martin Kaymer raises his arms after sinking the putt to win the 2012 Ryder Cup, while his caddy Craig Connelly watches with jubilation (Photo by Getty Images)

There may have been occasions when ferrets, introduced by Europeans while hunting down holes in the ground for rabbits and vermin in North America, have bumped into native rodent gophers.

Yet the two animals could never be confused because a gopher only ever grows up to eight inches long, while an adult ferret would be at least twice that size.

But when the 12 members of Darren Clarke’s European team go into their Ryder Cup locker room at Hazeltine later this month they will be confronted by both.

Not in the four-legged animal form, but in the shape of Julian Phillips, a long-time English caddie on the European Tour whose task at Ryder Cups since 1997 has been to ensure the players’ equipment, clothing and food needs have been organised for them.

Long before that, he acquired the nickname “Ferret” because his fellow caddies reckoned that when he would express strong opinions in locker rooms and bars, his face and nose would squeeze up like a ferret’s when it was about to enter a tight burrow.

But having held down his Ryder Cup job for so long, Irish caddie David    McNealy, a veteran of four battles against the Americans, reckons he deserves the nickname “Gopher” as well.

Not for any animal reason but because of his ability to hunt down whatever obscure item a player or    caddie needs, like how the computer text-based Gopher browser can dig through the internet for data.

Asked about the way Phillips carries out his job, McNealy told The Golf Paper: “As you can imagine at the Ryder Cup, for the players the demands on their time is total mayhem but the Ferret has done so many Ryder Cups now that he knows in advance what they are likely to need. And he is there for the caddies as well.

“If you want to go out and check some yardages he will arrange a buggy for you and if during a round you are feeling hungry he will come out and take a note of what you want and then come back out with it.

“The job he does is fantastic and the best way of summing it up is that the Ferret is the Gopher for the European team.”

It also says much about Phillips’ locker-room skills that while captain Clarke only picked his wildcards last week, it was 13 months ago that the Ulsterman rang him while he was caddying at the Made in Denmark event and offered him the job at Hazeltine.

But the job he will do this year is a far cry from the work schedule that the late, great Seve Ballesteros, for whom he was caddying for on tour at the time, envisaged when he got permission from the European Tour to have Phillips help his captaincy by organising the locker room at Valderrama in Spain nearly 20 years ago.

“The Ryder Cup was a lot smaller in those days,” recalled Phillips. “There just wasn’t so much going on around the players. But Seve set a precedent by having the ‘captain’s caddie’ in the locker room and it has just grown from there.

“Back then we also had two guys  from the European Tour around to help the players and caddies, but that’s all changed now because there are people around them that they know. And a familiar face can say things to them that others who they do not know so well would never say.

“And that’s going to be important this year with what I call ‘the changing of the guard’.

“With six rookie players in the European team, there are going to be a few rookie Ryder Cup caddies as well. And it’s going to be up to us more experienced caddies to help the rookie caddies adjust to what’s demanded of them at a Ryder Cup.

“They are going to find the week is as nervous for the caddies as it is for the players. But in the team and locker rooms everyone is treated the same.

“Everyone is made to feel an important part of the team and that, I am sure, is why Europe have been so successful.” 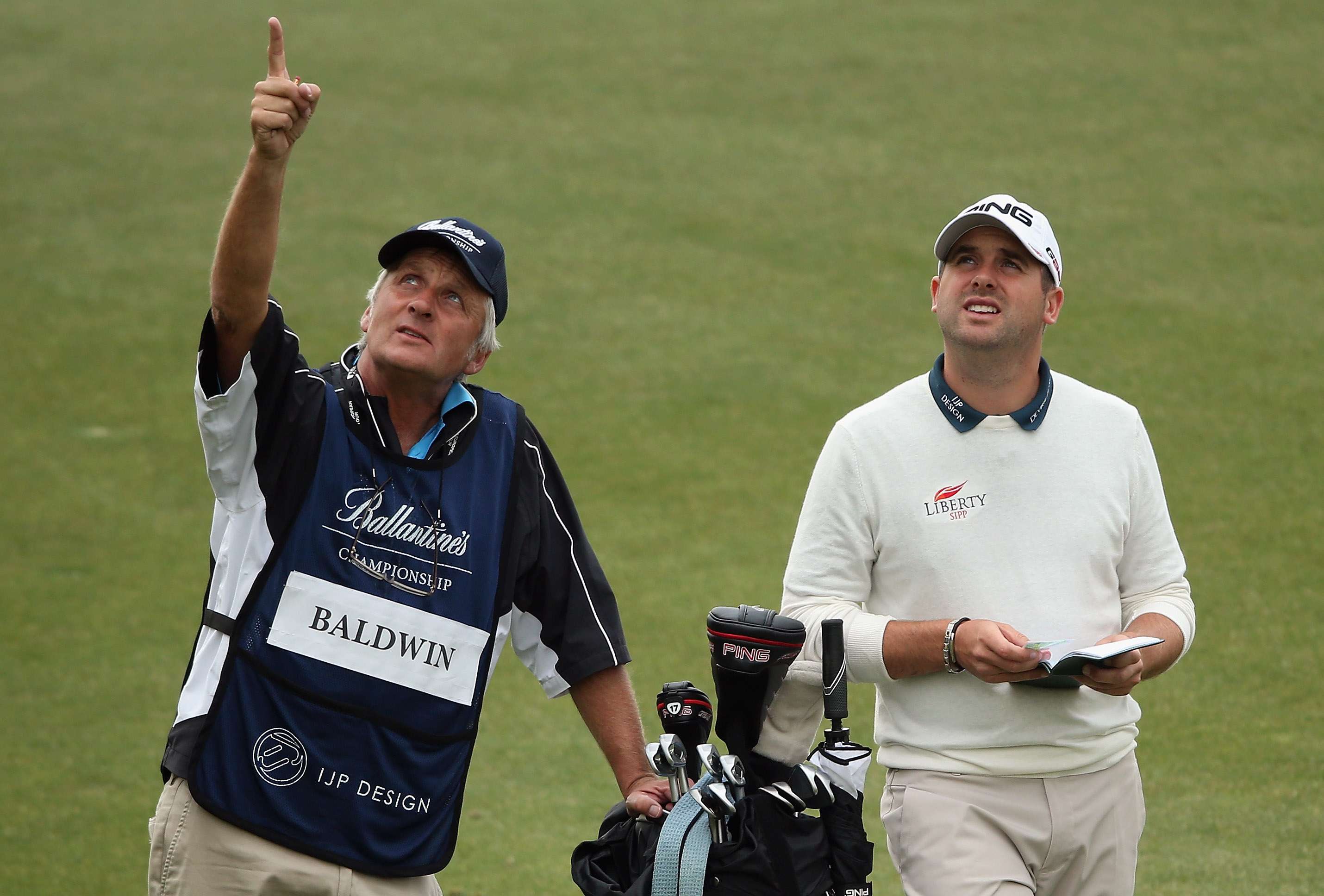 But making sure the new caddies feel at home is only a small element in Phillips’ work schedule which has him the first member of the team in the locker room each day and the last to leave at night.

He makes sure each player’s locker has everything he needs in it – from clubs, balls, clothing, towels and any small particular item that individuals like to take onto the course.

“But then you get a guy who comes in and realises that he has left something back in his hotel room,” said Phillips. “So then I have to arrange to get someone to go and pick it up. Whatever they want we have to do it, like leaving tickets in the right place for their friends and relatives.

“Then there are the uniforms the players and caddies wear. Potential members of the team are measured up months in advance of the Ryder Cup, but it’s been known for someone to have lost or put on weight after the measurements were taken. So at the start of the week some late changes have to be made.

“And making sure they have got the food they need is important too, especially on the practice days when the rounds can take up to six or seven hours, when the players may hit shots twice to get them right and also sign lots of autographs as they are going round.

“And when they are playing morning and afternoon in the Cup itself, that doesn’t give them much time to sit down and relax so it is important they get the right fuel inside them.”

Another of Phillips’ duties involves keeping watch on everyone’s possessions. “Stuff does go missing,” he said.

“And I remember after the Miracle at Medinah going back into the locker room to find someone trying to take up the carpet to take home as a memento.”

“They had a great night because at the start of the day everyone thought Europe was dead and buried,” Phillips recalled.

“I couldn’t join in because it was a long job clearly up in the locker room. But I didn’t mind because I don’t drink a lot and I had a couple of beers with the guys back at the hotel.”

But one other question put to Phillips by The Golf Paper also brought back a memory for him. He was asked: “What is the most obscure thing that a player or a caddie has asked you to sort out?”

Phillips did not hesitate with the response. “It was at the K Club in 2006 when at the end of a morning session a golfer complained to me that his trousers were too tight and were squeezing his private parts and that had affected his swing,” he said.

“So I had to go and find the seamstress that we had on duty and get her to take them out a bit before he went off to play again in the afternoon.”