Posted on 27th September 2016 by Adam Ellis in Featured, Features, In the Golf Paper | 0 Comments 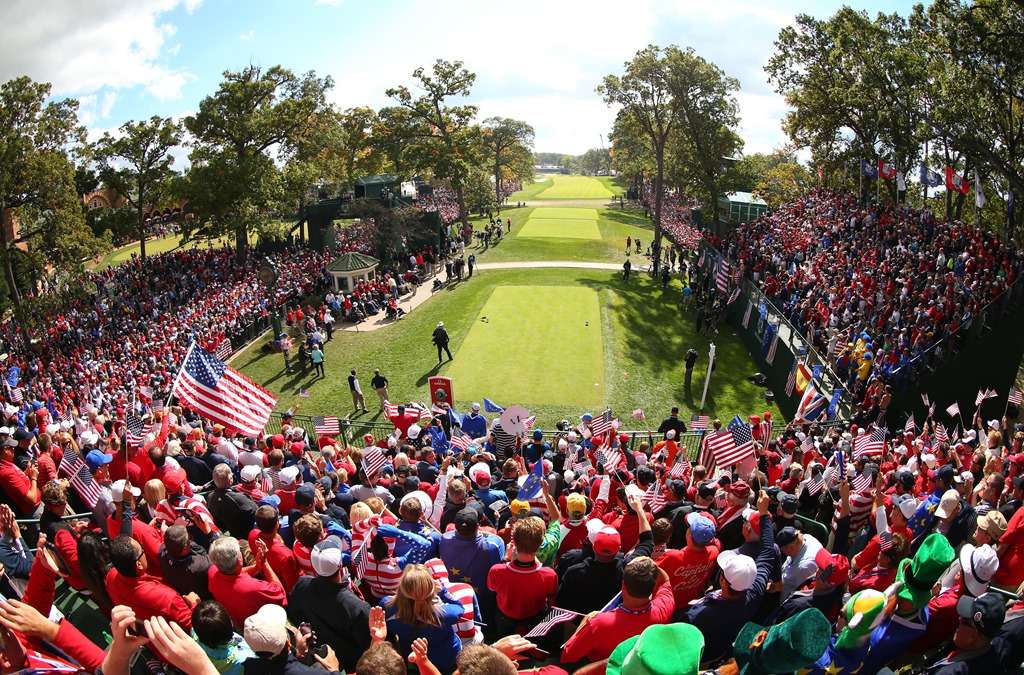 Pick up the pace: Players owe it to the sport to speed up the Ryder Cup in Hazeltine next week (photo by Mike Ehrmann / Getty Images)

Amid all the excitement and fun that a Ryder Cup usually brings to tables across the globe, one aspect of the biennial contest continues to grate. The pace of play is nothing short of disgraceful. Even in foursomes – “alternate shot” to our colonial cousins who think a foursome is a four-ball – it takes an inordinate amount of time to get some of the best players on the planet around a golf course.

According to a National Golf Foundation study in the US, slow play – defined as having to wait on the group in front more than a few times – was listed by 91 per cent of golfers surveyed as taking away from their golf experience.

Not much has done been done about it in the Ryder Cup though. Actually, that is a little unfair. One thing has been banned. At the conclusion of each hole players are not allowed to hit any pointless and extraneous practice putts. Instead, they are encouraged to make their way briskly to the next tee ­(something the Solheim Cup ladies should be doing too).

It’s nothing new, of course. For a long, long time – oh, the irony – slow play has been a huge problem at the sharp end of the game. As far back as 1950, a notice was given to players when they registered for the US Open at Merion. The fear was that slow play was damaging the game’s popularity, and the instructions in the notice could not have been clearer: “Be observant, reach your decision quickly and execute your shots with promptness and dispatch.”

Joe Dey, the USGA’s executive director at the time, was behind the campaign. “The time has come when we simply must act if the game is not to be seriously injured,” he said.

The size of the field for the 1948 US Open at Riviera was 171 players. It was lowered to 162 players the following year at Medinah, but that didn’t seem to help. Dey lamented that the first group (threesomes) took three hours, 27 minutes to complete the opening round, while the last group took a whopping four hours, 16 minutes.

“That is just awful, and it doesn’t make sense,” he lamented. “It hasn’t been so long since three hours was considered adequate for a round. This is murder on spectators as well as on players who wish to play at a reasonable speed.”

Of course, at the rate that ­championship golf and the Ryder Cup is going, three hours might soon be considered adequate to make the turn. So what’s to be done? Here are a few suggestions as to what might – just might – makes a difference when Europe and the United States reconvene at Hazeltine this month:

There is no need for the non-hitter to stroll back to the tee in order to metaphorically “hold the hand” of his partner.

Especially on par fours and par fives where the choice of club invariably comes down to one of two, the player not driving should head up the fairway and wait for the ball. If things go to plan – as they tend to do at this level of the game – the player hitting the drive will walk off the tee and not stop until she reaches the green. Simple. And quick.

This tedious practice seems to be especially prevalent in the ladies’ game. But it is not unheard of in the men’s game either. Part of golf is being able to align oneself squarely to one’s target. If you cannot achieve that on a consistent basis without help from another person, it is not unreasonable to suggest that you should not be playing in a Ryder Cup in the first place.

This is not exclusive to male golfers – the women are often just as bad – but it has been especially noticeable in past Ryder Cups. ­Players are hardly ever ready to play when it comes to their turn to hit. By all means pay attention to where the opponent’s shot ends up. But do so when considering what club is appropriate for your own shot. It’s not hard. Get on with it.

For 103 weeks out of every 104, these players line up their own putts and hit their own shots with only occasional help from their caddies. Why is it that they suddenly need to interject a third or even a fourth voice into the discussion? No putt or shot is so difficult that a committee meeting needs to be part of the process before club meets ball. Deciding on the line of a putt or the club/shot to hit should therefore be a two-person task. No more than that.

5) Pick up when you are out of the hole

This isn’t usually a huge part of the problem, given the proficiency of the players involved. But it is still ­relevant. There is no point in players hitting shots that are clearly going to have no bearing on the result of the hole. Put it in your pocket, gents.

Still, having said all of the above, it is clear that the problem with slow play in golf is not at the professional level. That distinction must be made. There are exceptions to be sure. Kevin Na, Ben Crane and Keegan Bradley spring immediately – more irony – to mind.

Tournament golf should abide by the rules, which in this case is Rule 6-7 – play without undue delay. But championship golf is different from the recreational game. The greens are faster than most golf fans can imagine. The golf courses are bigger.

Rare is the par five that can’t be reached in two shots. It’s still a game, but for Tour players, it’s also their (well-paying) jobs. That’s not to suggest that these talented ­individuals don’t have an obligation. They owe it to the sport to set a good example, starting at the Ryder Cup.

*This article originally featured in The Golf Paper on 21 September 2016 – buy your copy every Wednesday in UK stores.