Darren helped us switch from defeat to looking to Paris 2018 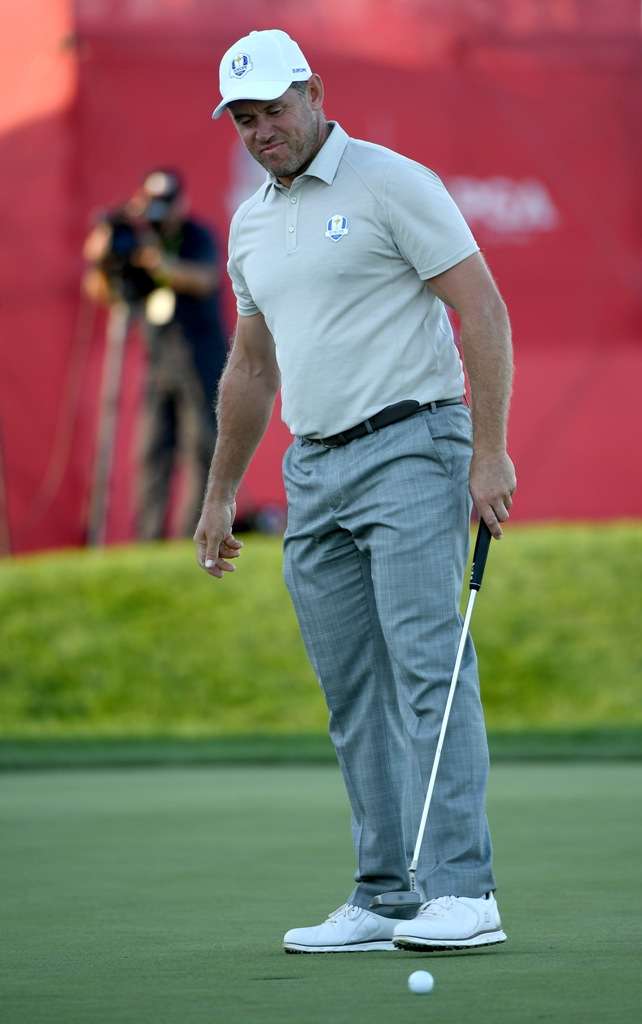 One of those days: Lee Westwood admitted that he felt he had let captain Darren Clarke down (Photo: Getty Images)

When the USA lost their eighth Ryder Cup of the last 10 at Gleneagles in 2014, it took only until the team’s press conference for their senior player Phil Mickelson to blame captain Tom Watson.

By contrast there has been no queue from any of the defeated                European team from Hazeltine to throw captain Darren Clarke under the bus. All 12 are sticking to Clarke’s Minneapolis mantra of “shoulder to shoulder.”

Indeed, unlike Mickelson, Europe’s senior player Lee Westwood has thrown himself under the bus. Speaking for the first time since the Ryder Cup, Westwood said at the British Masters at The Grove, near Watford, last week that he and his good friend Clarke had a heart-to-heart after Europe’s first loss since Nick Faldo’s team in 2008, and Westwood admitted he felt he had let down Clarke.

“Yeah, a little bit,” Westwood said. “Obviously I was a captain’s pick and I would have liked to have performed well for him but we sat down and chatted about it. He said, ‘What could I have done differently?’ I said, ‘I thought you did all you could.’ The American team did to us what we have been doing to them the last 20 years,” Westwood said.

His Ryder Cup will be remembered for the two-foot putt he missed on the 18th green on Saturday that killed any momentum Europe may have taken into Sunday’s singles. He played three matches and lost three in his 10th appearance. Does Westwood think a lot about that missed putt? “Not until you mentioned it, no,” he said. “I rarely lose sleep and people are always going to miss putts. Didn’t put a good stroke on it and shoved it a bit.”

Westwood recognised that his form was poor on the Friday morning so did the honourable thing and asked to be dropped until Saturday afternoon to give him time to iron out his problems on the range. “I think I was supposed to play Friday afternoon but I played so poorly I said to Darren somebody else will be more use to you in the fourballs,” Westwood said. “I got my game in pretty good shape and played well on Saturday afternoon and on Sunday. Sometimes you don’t get what you want, no matter how good the preparation you put in.”

Clarke chose to trust in the experience of Westwood and Martin Kaymer on Saturday. The plan failed. Of the six rookies, only Thomas Pieters, Rafa Cabrera-Bello and Danny Willett played more than twice. Matthew Fitzpatrick, Chris Wood and Andy Sullivan played just once before the singles. The three Englishmen spoke at the British Masters about their Ryder Cup debuts. Both had nothing but praise for their captain despite their lack of game time. “It was an amazing experience,” Fitzpatrick said.

“Obviously everyone is disappointed with the result. For me personally, it’s the same for everyone who didn’t play much. Everyone wants to play, that’s just a fact. But I completely understand Darren’s mind set.” Fitzpatrick was not surprised he only played twice. He took the advice of one of Clarke’s vice-captains. “My whole thing before from Thomas Bjorn was ‘expect to play one, prepare to play five’. I expected the six guys that had played before to pretty much play all the time, so anything we got was a bonus,” Fitzpatrick said. 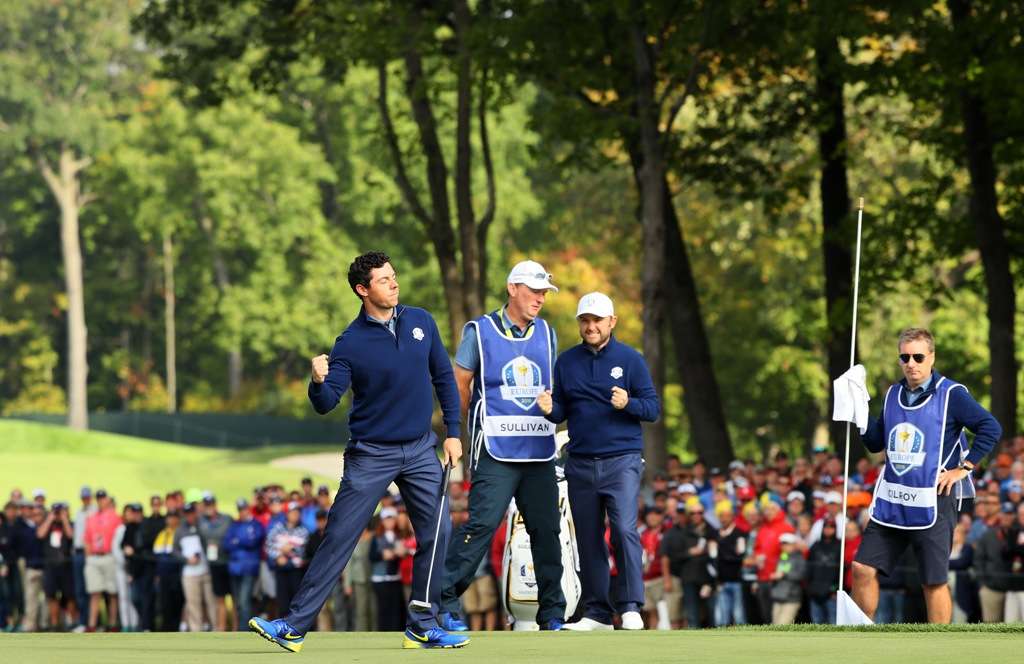 United we stand: Rory McIlroy and Andy Sullivan teamed up for the first session of foursomes (Photo: Getty Images)

“I understood that I probably wasn’t going to play Friday, with it being the first day and we wanted to see how it all pans out, and almost let the experienced guys do what they do. I just expected to play one, and        I got two.”  The 22-year-old played with Henrik Stenson in Saturday morning’s foursomes. They lost 3&2 to Brooks Koepka and Brandt Snedeker. Fitzpatrick played the     anchor role in the singles going out 12th. He lost 4&3 to last year’s Open champion Zach Johnson but took it as a compliment that Clarke put him out last.

“First thought, I was kind of delighted to be honest, becauseobviously he put that faith in me, if it did come down to that, then I was probably going to be the man,” Fitzpatrick said. “Martin Kaymer said to me on Saturday night ‘I really, really, really hope that you get the same opportunity that I had.’”

Kaymer holed the putt that retained the Cup at Medinah in 2012. “Obviously it would have been nice to have that but it wasn’t to be this time. To play off that first tee twice and to hear all the cheering – it’s something I don’t want to miss from now on,” Fitzpatrick said.

Andy Sullivan had the privilege of being requested by Rory McIlroy to be his partner. They went out in the first session foursomes against Phil Mickelson and Rickie Fowler.

“Massive to get the nod from Darren and then obviously to play alongside Rory was absolutely fantastic,” Sullivan said. “We got told on the Wednesday night, Darren left it very late to tell us. I think he was playing his cards close to his chest, which was fair enough. It was unbelievable. And for Rors to turn around and say, ‘Yeah, go on, hit the first tee shot, I want you to have the full Ryder Cup experience, I want to see you pooing yourself on the first tee.’ Yeah, I was awfully grateful for that,” Sullivan said. “It was a fantastic     experience.”

Sullivan hit into the water at the 17th and the Americans won 1up.“I wanted the ground just to swallow me up. You’ve got about 20,000 American fans just laughing at me,” he said. “That’s pretty hard to take.”

Sullivan didn’t play again until Sunday’s singles. “It was a difficult situation for Darren to be in, obviously had one good session out of three and we needed points in that fourth session. So I can understand the team he picked and to try to go out there and get the points,” Sullivan said. “He went with experience, which I think nine out of 10 captains would do the same thing. So it’s difficult to criticise him. I think he made the right call. It just didn’t come off.”

Chris Wood won a point in the company of Justin Rose in Saturday morning’s foursomes but that was his only match until the singles where he lost to Dustin Johnson on the final hole. “I felt like I handled it really well being a rookie,” he said. “The thoughts that go through your mind leading up to it are not to let the team down. So the feeling of winning my point with Rose was as good as winning a tournament for me,” Wood said. “When I was coming up the last on Sunday 1 down to Dustin, the wind is out of your sails, because 15 minutes ago, the US had won the Ryder Cup. Padraig (Harrington) said to me, ‘Don’t forget the number on your shirt,’ – as in get something out of your game. This is for your Ryder Cup record.’ So that was a strong message for the whole week for us,” Wood said.

Like all the rookies, Wood said he now wants to play in multiple Ryder Cups. Westwood wants one more before putting his name forward to be captain in 2020. “Having played one and lost, you don’t want that feeling again,” Wood said. “I want to experience the Sunday night in the team room when we’ve got the Ryder Cup and you can take it home with you, all that sort of thing.”

Wood was asked to explain why the European team seemed unusually jolly in their post-defeat press conference in Hazeltine. They were drinking beers and even posted a team selfie on twitter. “The team spirit was unbelievable. Darren did such a good job motivating us,” Wood said.

“He couldn’t have got more out of us. I’ve never felt such a strong bond before that I had with those guys. The team meetings were awesome. There were times when you could have heard a pin drop and Westwood cracked a joke that only he could get away with because it was Clarke. And Clarke made him aware of that.

“You go to bed after a meeting and you want to get on the first tee. “He helped us switch from defeat to looking to Paris. ‘Come on lads, we’re going to have them!’ There was an air of confidence even though we’d just lost,” Wood said. “They won’t know what’s hit them when we get to Paris in 2018.”