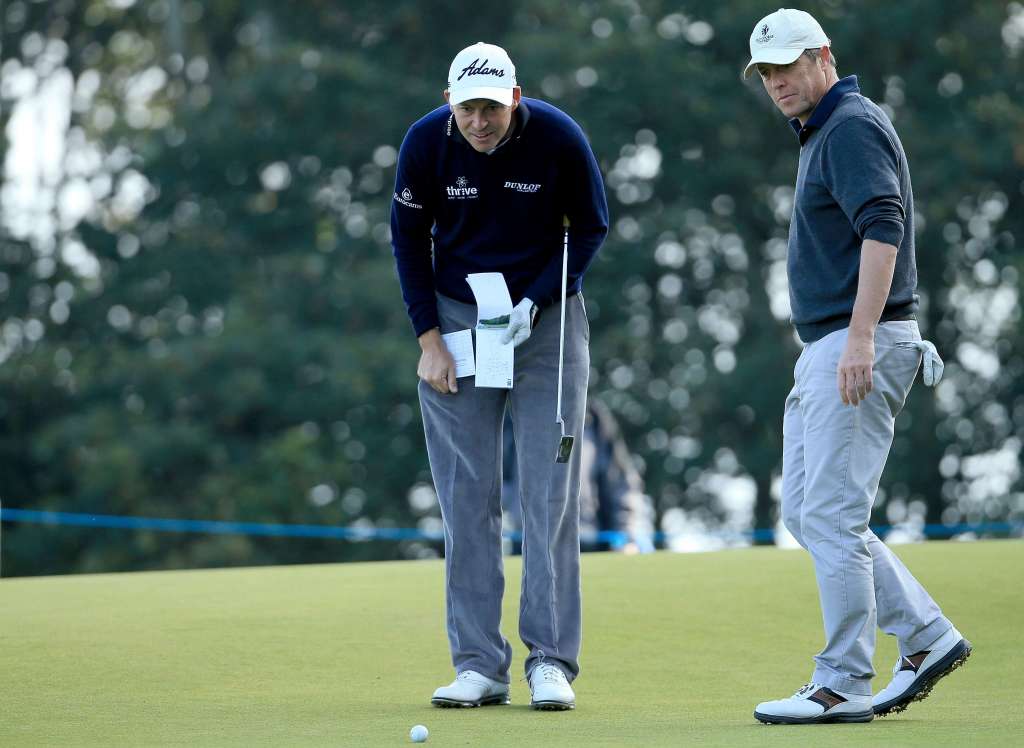 Middle of the 18th fairway, Old Course, St Andrews, nine-iron. What could possibly go wrong? So there I was, 12 years ago, professional hack, amateur hacker, playing in the Dunhill Links Championship, the amateur partner (just to clarify) of David Howell, professional sportsman, tournament winner, good bloke, and soon to be Ryder Cup hero.

What happened next is his fault. He made the cardinal sin of any pro-am. He messed with my already befuddled mind. He gave me a tip. “Just grip down a little and hit it as hard as you can.” Seemed simple enough advice.

Of course, I made the cardinal sin of listening and thinking that, because he’s a professional, the mere act of following his instruction would miraculously instil in my swing an arc of perfection in takeaway and follow-through that I had previously employed as frequently as children listen to their parents and do as they are told. I did as I was told.

Now if Howell had just snubbed me, like many professionals do in a pro-am, I would have been fine and dandy and slapped my nine-iron along or, ideally, over, the widest fairway in golf towards the 18th green and I’d have had two putts for a par on the easiest hole in major championship golf.

But Howell just had to be helpful and sociable, and spoil everything. I looked around before standing over the ball, soaking up the atmosphere, breathing in the history, taking in the scenery around this hallowed piece of sporting real estate: the regal R&A clubhouse, the South Sands beyond the 1st fairway where they jogged in their baggy shorts in the opening scene of Chariots of Fire, the old university halls of residence with the pointy wizard’s hat turret, Old Tom Morris’ shop, the Rusacks Hotel where Arnold Palmer stayed when he came to play in The Open for the first time at the home of golf in 1960, the Jigger Inn behind me by the 17th green, and the Old Course Hotel in all its architectural grotesqueness staring down in horror at amateurs allowed to desecrate one of the world’s greatest sporting arenas with their hopeless hackery. Stay with me, the punchline’s coming just around the next dogleg.

Like everyone lucky enough to play at St Andrews, I imagined the grandstands packed and cheering, and me with a two-shot lead in The Open Championship, doffing my cap to salute the standing ovation before being handed the old Claret Jug and posing for photographs on the Swilcan Bridge. I glanced up at the leaderboard beside the green.

That was my second mistake after digesting Howell’s free, bite-size golf lesson. Writ large in capital letters was Howell/Mahoney. Swindon’s finest was playing well. Whereas my contribution to the under-par team score was akin to Mario Balotelli’s goal tally for Liverpool last season.

Now I understand why many professionals say they never look at leaderboards. The pressure was now on. We were on the telly, too. Sky Sports’ cameras were beaming live, moving, full-colour pictures of one of the leading groups in the Dunhill Links Championship, bringing my game into what the satellite channel’s executives would like to think are tens of millions of front rooms all over the world.

So there I was, an 18-handicapper, on live TV, on one of golf’s most famous holes. My third mistake was to look around and spot the photographers gathering like lions. I was the startled gazelle. Or injured buffalo. They were waving their support, though. So that was nice. No, wait, they were gesticulating something entirely different to support. They were hunting in a pack. I was lunch.

Instead of ignoring Howell’s friendly words of advice, I did exactly what he told me and, in so doing, stepped outside the comfort zone of my own game. If an 18-handicapper indeed has a comfort zone rather than playing as if permanently in need of a comfort break. So I swung as hard as I could, attempting to emulate Arnold Palmer lunging at the ball like a Neanderthal clubbing a mammoth. Wham went the ball. Straight right. Like an Exorcet missile. Shanked. Over the spectator barriers. Over the road that runs alongside the course. Out of bounds. Out of sight.

Then a miracle occurred. The ball was hurtling towards a 30-foot floor-to-ceiling window. I yelled “Fore!” Howell yelled “Fore!” Innocent bystanders ducked and dived into shop doorways. Women screamed. Children cried. An air-raid siren pierced the peaceful Fife air. Alarm bells rang in people’s heads. The ball somehow spun at the last second possibly deflected off a tartan shopping trolley or the bobble of a woolly hat. The absence of the sound of shattering glass provided only brief relief. The ball slammed against a wall and began its return journey towards spectators that were still getting to their feet recovering from the first attack. Now my ball was careering at them from behind. They were trapped in a human pinball machine. The ball bounced on the street, looped up, bounced again, rattled against the spectator barrier, ricocheted back towards the buildings, thumped against the wall again, rebounded towards the heads and limbs, missed everyone, clanked against the railing of the barriers once again, dodged through a gap, rolled back onto the sacred turf of the Old Course, gently completing the final leg of its lap of shame before coming to rest back at my feet in the exact spot from which I had sent it on its fabulous journey.

Silence. Not even a snigger from the galleries. Fingers pointed at me like witnesses who had spotted the assassin on the Grassy Knoll holding the smoking gun. Nowhere to hide. Nowhere to run away to. Naked. Exposed. No one else to blame. Apart from Howell. I’ve not played since at the Dunhill Links and, the following year, Howell upgraded his amateur partner to someone called Samuel L. Jackson.

Shamed in public, this was no time for an awkward British laugh in the face of adversity, and no words from me could have rescued the moment. It was left to Howell to speak for everyone that had witnessed what was surely one of the most memorable shots ever played on the Old Course in 500 years. “F*** me!”