Preparing for this week’s HSBC Champions event in Shanghai, it is quite unbelievable the difference in the thoughts that are going through my mind now compared to those that were at the start of the season.

Back then I was at home with a plaster cast on my left wrist after breaking a bone in it playing tennis and I was worried my career would suffer.

Now I know that if I can maintain my current form over the next three events in the Final Series of this year’s Race to Dubai then many doors will open for me in 2016.

Finishing outright fifth on Sunday night in the Turkish Airlines Open, I climbed nine places in the world rankings up to 56th.

A good result this week at the Sheshan International, or next week in the BMW on the other side of Shanghai, should take me into the top 50. 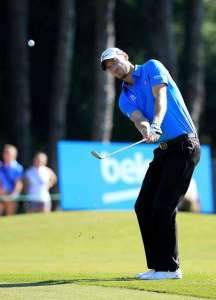 And if I am still there on New Year’s Day that will lead to an invitation to play in The Masters landing on my doorstep and other invites to the Majors and World Championships.

And the fact that I am now 13th in the Race to Dubai – after finishing in the top ten in my last four tournaments – means I still have a chance of actually topping the money list this season, with three more good finishes.

Guys say out on Tour that this is the best time of the year to find your best form, with so much prize money up for grabs every week. But it is one thing talking about it and quite another thing actually doing it.

But my form is good at the moment that I could have given Turkish winner Victor Dubuisson a closer run for his money after shooting 66s in the first two rounds… if it had not been for the game I had on Saturday.

Just after I had signed for a 71 I was asked my thoughts on the round for a radio interview and all I could say was I was glad to have got off the course.

The problem was slow play. I was in the last group and waiting on almost every shot I felt really flat. I just couldn’t get my adrenalin flowing.

What I needed was an eagle or a chip to get me going, but nothing happened for me at all. I was just making par, par, par and nothing else.

It was a pity, because I was really impressed with Antalya as a golfing holiday venue with a great hotel. I had my fiancée Bethany with me for a week and she said she would happily go back there any time.

And despite the delicate political situation – with a general election taking place in Turkey while we were playing in the final round, and the problems with IS in neighbouring countries – I never felt our security was threatened. Everything went smoothly.

Now moving onto Shanghai for two weeks of golf in China, I have to manage with a different culture and things like food, but I know I should enjoy two great weeks of golf.

The Sheshan course which plays host to the HSBC is always in great condition, with a rarely a blade of grass out of position, and the 18th is one of the great finishing holes on the European circuit.

To have a water-lined par five which is reachable in two creates eagle opportunities, while the water guarding the green can also be the cause of crucial bogeys.

And on Sunday afternoon in a tight finish, to know that the leadership could change with a two or three shot swing at the last hole can be very exciting. I always prefer courses where the 18th is a par five.

I just hope that my run of good form continues and that I am in with a shout again to take on that challenge.

*This article was originally published in TGP on 4 November.