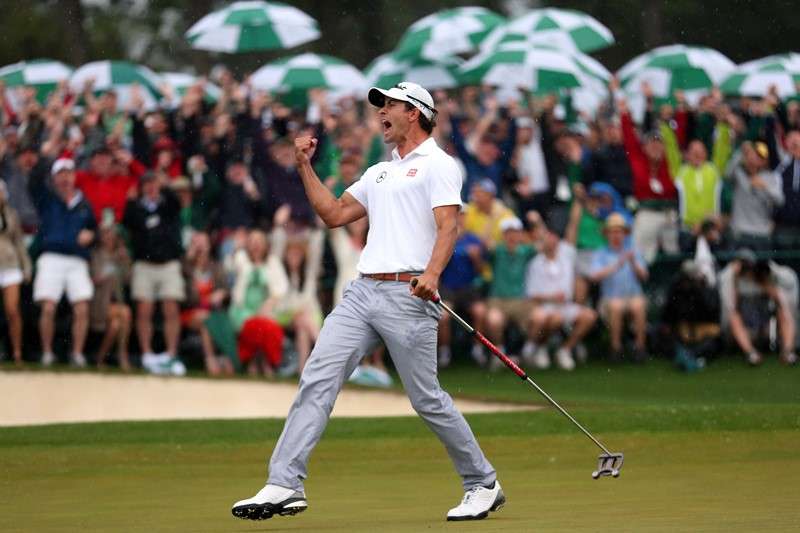 Gone Missing: Adam Scott has already stated that he will not go for gold in Brazil (photo by Getty Images)

I am quite concerned that next month, when the qualifying process closes, several star names will be missing from the entry list to go for gold when golf returns to the Olympic ­schedule after an absence of 112 years.

The stay-away players have their varied and, what they consider, valid reasons for not wanting to compete in Rio de Janeiro in the greatest sporting show on earth.

Adam Scott, for instance, says that  he wants to spend the week with his family back in Australia, at the end of a hectic schedule in which he will have played three Majors and a WGC almost back-to-back.

Home-grown players like Rory McIlroy and Danny Willett have stated they are concerned that if they were to catch the mosquito-born zika virus that has spread so widely in Rio that it could have serious health implications for themselves and their families.

Others like the South African Major winners Louis Oosthuizen and Charl Schwartzel have not declared their ­reasons for staying at home and, of course, they all have the right to make career decisions for themselves.

But there will be many side-effects  that could harm the future of our sport if a large number of world-class ­players do not travel to Rio.

Since golf’s previous appearance on the Olympic schedule – at St Louis in 1904 – two previous attempts have been made to bring it back but both ended in controversy.

A tournament was scheduled to be held at Royal St George’s in Kent for the London Olympics in 1908. However, the R&A and the Olympic Organising Committee fell out in the build-up over the ­eligibility of players to take part.

Canadian George Lyon, who had won the gold medal in St Louis, sailed across the Atlantic to try to win a second one but the event had been ­cancelled by the time that he arrived over here.

And it was not until 1936 that golf once again was linked to the Games when Adolf Hitler backed a ­tournament to be held alongside the Berlin Olympics because he liked to use the sporting media to spread his propaganda.

Invitations were sent out to 36 ­countries to send two-man teams to play at a course in Baden Baden for what Hitler called “the golf prize of the nations”.

However, given the early horror ­stories that were starting to emerge of the way that Hitler was ruling Germany, only seven countries accepted the offer.

And when he heard that GB&I’s Arnold Bentley and Tommy Thirsk ­produced the better golf late in the fourth round to beat two Germans who had been leading, Hitler ordered his chauffeur to turn his car around and cancelled the plan for him to present the winners’ trophy.

And it was only in the 1990s that talks began to get golf into the Games again, culminating in the inclusion in Rio and a further tournament to be played in Japan in 2020.

In reality, it is a two-event trial that could be seen as a failure if the biggest names in the sport do not take part. You only have to ask the US Tour how gate income at tournaments and ­viewing figures on TV have dropped since, after 15 years of dominating golf, Tiger Woods is no longer playing because of injury.

Having invested millions in a new course in Rio, the Olympic organisers would be equally horrified to see vast empty spaces behind the ropes in August. But, from a financial point of view, the game would also suffer in countries where golf is looking to expand worldwide.

Since it was announced that golf would be played again in the Games, the Olympic committee has started putting money into the sport.

And I got first-hand experience of that in March when I went over to work with the Polish Golf Association,which had received support from the Olympic association.

It had fronted up the money to build a first-class golf training facility and given young players access to                              fitness and psychiatric experts working in the country’s more ­traditional sports. But what will happen to that and other similar programmes if the Olympic Committee decides that the trial is over after Japan, or even earlier after no-shows in Rio, is anyone’s guess.

When I think about the potential absentees, I look back to how I might have felt had the Olympics been on my schedule at the height of my career. Had I had the chance to go, I would have been so excited and how nice it would be now if I could look back on those days and tell people “I was an Olympian”.

In other sports that is key. Look at Andy Murray. On Sunday he won at Queen’s, now he is finalising his ­preparations for ­Wimbledon and then trying to win his second Olympic gold will be at the forefront of his mind.

It is a pity that all the top golfers do not share that hunger. My hope is that we have most of the world’s best in Rio and the event is a great success in terms of audience numbers.