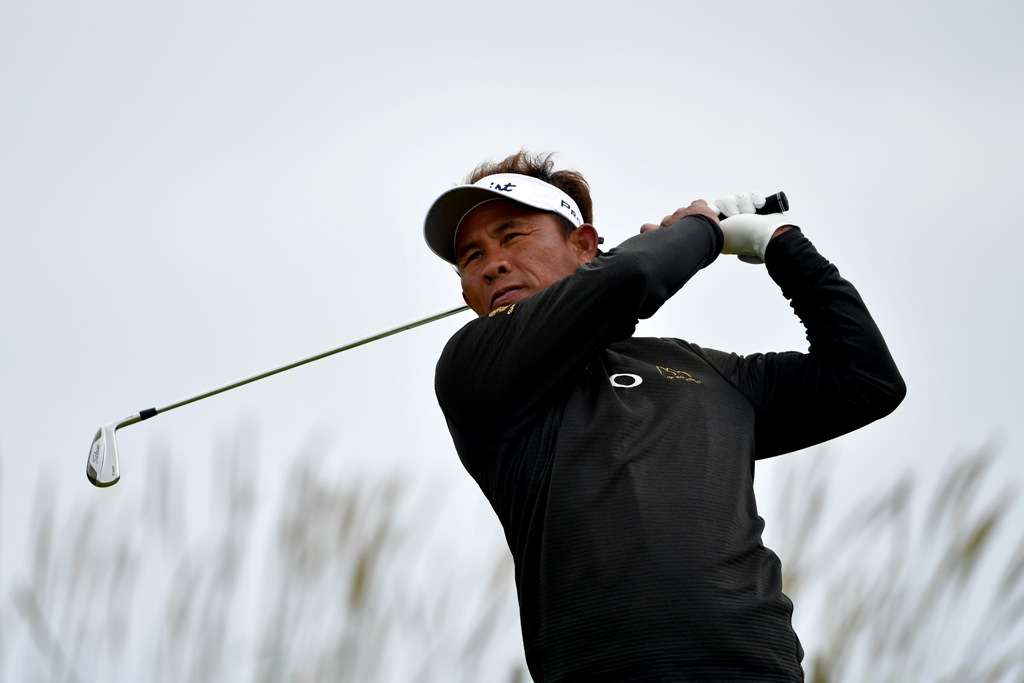 (Photo by Getty Images) Proud moment: Thailand’s Thongchai Jaidee is honoured to be a part of the Games

The huge question mark hanging over the future of golf as an Olympic sport would not exist if all the world’s top men players had copied the approach and enthusiasm towards playing in Rio of Thongchai Jaidee.

At the age of 46, and only ranked 43rd in the world, the former Thai paratrooper might not be at the top of many people’s wishlist to mount the podium on Sunday and have a gold medal draped around his neck.

And standing on the first tee at the new Reserva de Marapendi course tomorrow Jaidee may well have a thick cloud of emotion in front of eyes his blocking the view of the fairway as he prepares to play with Spain’s Rafa Cabrera Bello along with the  Open champion and hot gold medal favourite Henrik Stenson.

Firstly because as a youngster in his hometown of Lopburi, Jaidee wanted to follow a career as a footballer and on TV his idol was Brazil’s, if not the world’s, most famous footballer, Pele.

And while Thailand did not possess a soccer squad capable of hitting the bigtime of a World Cup he hoped one day that he might make their team to play in the Olympics.

That dream ended when a fresh accident left a sharp wooden skewer lodged in his feet and, after switching to golf because his parents lived beside a course, he could never have predicted that his new sport would return to the Games’ schedule after being absent since 1904.

“In my life, I never thought golf would be played in the Olympics,” said Thongchai who is now one of Thailand’s richest sportsmen after winning 12 titles on the Asian Tour and four in Europe.

“And although I’m 47 later this year, I’m looking forward to representing my country. It’s a proud moment in my career and it’s going to be amazing.  The Olympics is the greatest sporting event in the world so I’m grateful to be a part of it. To be honest, I’m proud and excited to represent Thailand. If I do win a medal, it will be a plus. But just representing my country and Asia is what I’m really looking forward to.”

Furthermore, Jaidee has travelled to Brazil just five weeks after the highest profile win of his career when he beat Rory McIlroy and Francesco Molinari down the closing stretch to take the French Open title at Le Golf National in Versailles.

And he’s certainly not discounting his chances of glory on Sunday which have improved by the sad absence from The Games of top world stars like McIlroy, Jordan Spieth and Jason Day.

“I’ve won many events in Asia and Europe and I’ve played in all the Major tournaments,” he said. “The only sporting event missing from my career is playing in the Olympics so it really ranks on top of my list.

“The goal is to win in any tournament which I’m playing in but if I do win a medal at the Olympics, it will be an entirely different story. When you win for your country, the feeling is definitely better than winning for yourself.

“I remember in 2008, Somjit Jongjohor won the gold medal in boxing and that was a proud moment for us. We’ve won a few gold medals in boxing so that has been a good sport for us. Maybe golf will be a popular sport for us in the Olympics as well.”

Jaidee also hopes to catch some other sporting action during his time in Rio and it is no surprise that football ranks high on his list as he said: “I do not have a favourite Olympian but my favourite team is the Brazilian football team.

“They will be an exciting team to watch when they play in front of their home fans.”

Since he is only ranked 11th in Olympic men’s tournament, Jaidee will not be the focus of attention tomorrow but as the cameras zone in on the fanourite, Henrik Stenson, they could pick up a look of tiredness in his eye.

Not once has the Swede considered joining the other high class Rio stayaways because of the threat posed by the Zika virus having said often: “I am not afraid of mosquitos, I am more afraid of bears.”

But he does have some sympathy with rivals who blamed the hectic summer schedule for giving Rio a miss after a programme which has seen three of golf’s Majors and a World Championship event played in the past six weeks.

After recent poor final round in the USPGA at Baltusrol, he admitted: “That week took a lot of energy out of me and after the Olympics we have got the Fedex Cup and the Ryder Cup coming up and we haven’t got time to recharge. But I have been looking forward to the Olympics and that hasn’t changed. Its going to be an experience of a lifetime, I think as a sports fan.”

British medal hopes should be strong since Major winners and the best two players of the summer, Danny Willett and Justin Rose,   insisted they wanted to be part of the Games and are ranked as high as four and five in the 60-strong field in Rio.

Rose summed up his approach saying: “It’s potentially a once-in-a-lifetime chance and walking out in a jam-packed Maracana Stadium, it’s something not many people ever get the chance to experience.

“I really truly believe it has been a great decision to be here.

“I hope the golf is a huge success and the guys regret not coming.” But his and Willett’s rankings have been accumulated over the past 12 months and  neither of them have had a top-ten finish in any of the recent big tournaments.

And although weakened by absenteeism, there are still enough other good players in Rio to out-shoot them with low scores.

If Open champion Stenson and the English pair do not find their top form that could provide an opening for Spaniard Sergio Garcia.

He recently won the AT&T Byron Nelson on the US Tour and top-five finishes in both the PGA at Wentworth and the Open at Troon would suggest his golf is in good enough shape to take Olympic gold.