Posted on 3rd August 2016 by Adam Ellis in Features, In the Golf Paper | 0 Comments

TONY JACKLIN has called on golf’s ruling bodies to embrace change in an effort to arrest the slump in the amateur game.

A sharp decline in the numbers playing the game and an increase in golf clubs experiencing ­financial hardship has added to the urgency, ­according to the two-times Major winner.

Jacko says that the ­professional game is in a healthy state and will ­continue to prosper under European Tour chief ­executive Keith Pelley.

But the former Open and US Open champion said: “The amateur game is ­undergoing something of a rethink because people are no longer prepared to take five hours to play a round of golf and that has to be ­addressed.

“I understand from ­conversations I had at a ­recent Jack Nicklaus event that the USGA is looking at the size of the golf ball and playing shorter courses where it would not travel so far. People need to be able to get round quicker so the game is not so time-­consuming and not as ­expensive. All of that would work in favour of the ­amateur game and I think these ideas will evolve and hopefully change the game and help boost the numbers of participants.

“I think there are also probably too many golf clubs. They overbuilt in America in the 1980s and here when farm subsidies were not so good and ­people started creating courses that were not of a high standard.

“The fact is we need to ensure that we keep ­encouraging youngsters to play the game and not ­forget that they are the champions of the future.

“But the pro game, which is golf’s shop window, is in amazing condition. The first prize at the Open was £1.175million compared to the £4,250 I received, so the money has moved beyond imagination.” Jacklin was speaking ahead of the Farmfoods British Par3 Championship this week at Nailcote Hall, Warwickshire where he is the event ­ambassador.

The prize-fund at the Par3 Championship is a fraction of the £6.5million on offer at Royal Troon, but €150,000, a third of which goes to the winner, is not insignificant and Jacklin stressed: “the event just gets better and better. 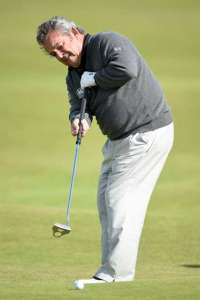 “This is the ninth year we have done it and it’s always fun. But we’ve got some ­serious players, the likes of Edoardo Molinari, Tommy Fleetwood, Paul Lawrie and Barry Lane, the defending champion.

“There are also some ­notable celebrities, ­including Nigel Mansell and Peter Shilton, and Sky gives us an hour of coverage.”

Jacklin is also in the field, but he doesn’t play much golf these days, explaining: “I’m no longer competitive. I had a go at senior golf for five or six years but I am not under any illusions. I’m 72 now and I’ve had a good career.

“I feel very fortunate that I have other things in my life to occupy me whereas many of my contemporaries don’t and hit balls every day because they have nothing else to do with their time.

“I’ve played around a dozen times this year and I get invited to a couple of legends of golf events in the States. I also do a bit of corporate stuff.

“But age nails you in the end. I can’t hit the ball as far as I used to and it still comes down to making putts, and I’ve reached the stage where I’m not very good at that either so why would I want to continue to frustrate myself? I do some media work and watch a lot of golf, both men and women’s on TV, but that also means travelling and ­ultimately when I began playing on the Champions Tour in 1994 after the initial couple of years of visiting new places, travelling 30 weeks of the year and ­staying in hotels lost its ­appeal. The older I get the more I like to be at home.”

Regardless of where he goes, Jacklin is invariably recognised as one of Britain’s most successful golfers, but he insisted: “That is not an essential need in my life. Living where I do in Florida I am able to have a very private life these days.

“But, yes, it’s nice to be ­remembered for being a trailblazer, I suppose, but I don’t rely on it.

“I am very hard of ­hearing and the irony is that most of the functions I’m ­invited to are in the evening and they tend to be noisy and I don’t hear well in that environment, so I’d just as well leave be.

“It’s the same when it comes to TV work.

“I can’t wear an ear piece as I have hearing aids due to the fact that I have less than 50 per cent voice ­recognition in my right ear and require a cochlear ­implant.

“So I struggle in that ­situation and I’d rather not put myself through what can be a nerve-wracking ­experience.

“I’m not embarrassed by it but you can only say  ‘I beg your pardon?’ once, so it’s better left alone.”