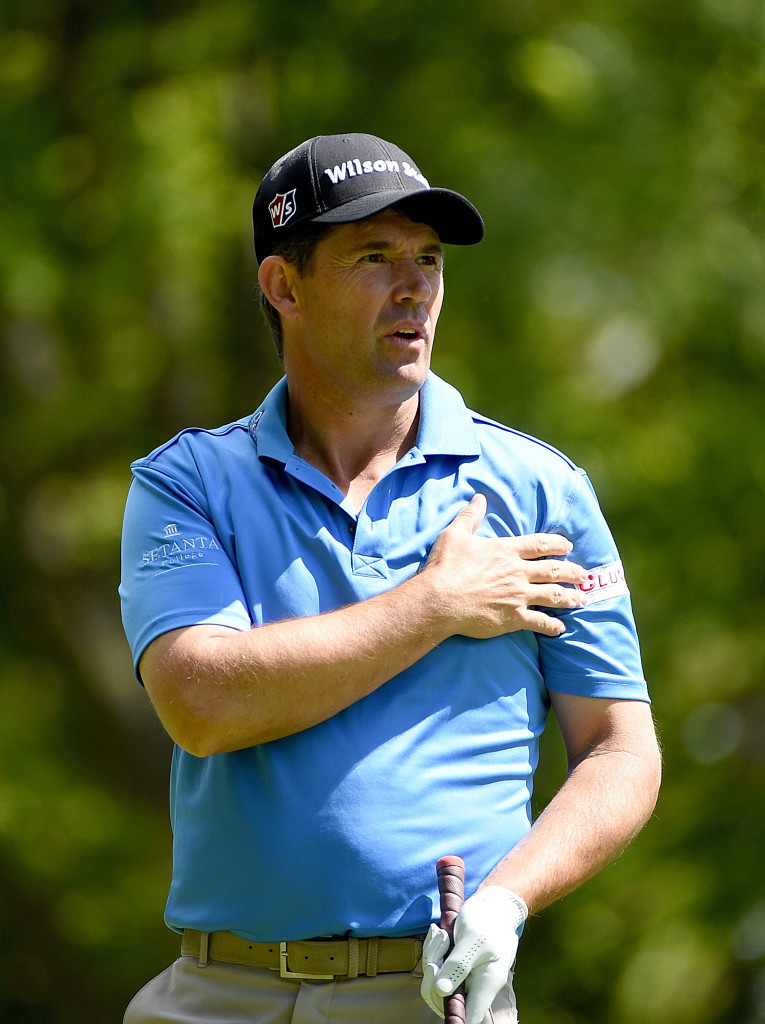 After putting himself through a gruelling 36-hole fitness test on Monday, Padraig Harrington is determined to drive off from the first tee tomorrow at the Irish Open.

However, Ireland’s ever popular triple Major champion has an extra agenda to try to compete apart from wanting to entertain his army of home fans at Royal County Down.

On Monday, after making bogey at his final hole in a 36-hole qualifier at Walton Heath in Surrey, Harrington failed to gain a ticket to play in next month’s US Open in Seattle.

But he still has an 11th-hour opportunity to play in the second Major of the year if he can shrug off a shoulder injury and play his best golf over the next three weeks.

He needs good finishes in both Ireland and the US Tour’s FedEx St Jude Classic in Memphis to climb from his current 86th in the world ranking back into the top 60 to earn a pass to play at Chambers Bay.

“It can still be done,” said Harrington. “And I have worked out that I will need to win at least 25 world ranking points from those events to do it.”

To have a chance to earn those points, however, Harrington knows he must shrug off the shoulder strain that he picked up during a gym workout, and which also forced him to miss the PGA Championship at Wentworth.

The signs did not look good at the start of his first round over the New Course at Walton Heath, where his level-par 72 saw him lying six shots adrift of morning leader, England’s John Parry.

“I nearly walked off the course after four holes because it was like trying to swing the club one handed,” he said. “I struggled badly in the morning – really struggled to hit the ball. And I wouldn’t like to be teeing it up on Thursday that way.

“But it did ease off during the afternoon, and it was nice to get a run going on the back nine.”

Unfortunately, he also discovered when he hit his ball off line at his 36th hole of the day that the injury could still be an issue this week.

“It showed some good signs,” he said. “But it hurt me again out of the heather on the 18th. Hopefully, I will be healthy and ready to go on Thursday.”

And after shooting a 68, which included a run of four straight birdies from the 13th hole, he found himself only one place short on the leaderboard from claiming one of the 11 US Open places that were on offer.

Furthermore, he then stayed on at Walton Heath for another three hours to take part in a five-man play-off competing for one place on the US Open’s Reserve list.

Before he flew off to Ireland later on Monday evening, Harrington declared: “ I am going to have a day off tomorrow so that hopefully I can play in Wednesday’s Pro-Am. And I must tee it up in the first round on Thursday.”

The qualifier was won by Frenchman Alex Levy, whose career soared last year when he won the China Open and the Portugal Masters and have made his debut in two world championships last year he earned his US Open debut with an 11-under-par day at Walton Heath.

And India’s Shiv Kapur, who finished just a shot behind him, was quick to point out that earning a place in a Major through qualifying rather than being ranked within the world’s top 60 did not necessarily mean he would just be going to America to make up the number in the field.

“Michael Campbell came through qualifying here and went on to win the US Open that shows it can be done,” he said.