Jeremy Chapman column: ‘There may be trouble ahead’ for Team Europe 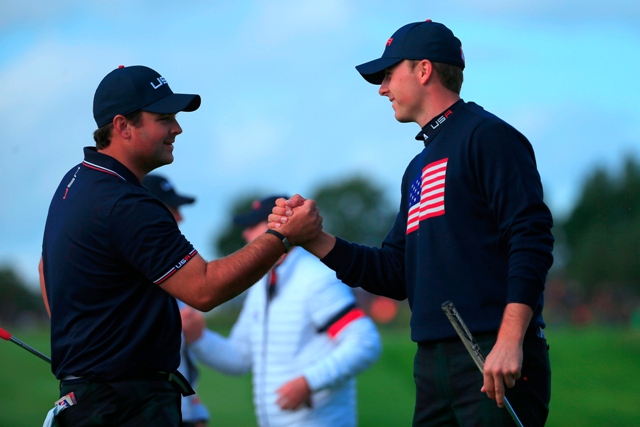 Here’s absolutely what you don’t want to hear: Europe have had a cracking Ryder Cup run, but even if we keep the trophy next year, the 2020s will bring a spell of American domination. I won’t be popular for saying it, but a look at the potential of the under-30s on either side of the Atlantic offers a very fair indication there are tougher times ahead.

By the week it’s becoming clearer that the American college system is producing more world-class youngsters or players of potential world-class in the early/mid-20s than we are – Masters and US Open champion Jordan Spieth is 21, Patrick Reed, Justin Thomas, Patrick Rodgers and Brooks Koepka, all exceptionally gifted, the right side of 26.

Who do we have in that age group to back up Rory? Lee Westwood is now in his forties, Ian Poulter hits that landmark next January, Jamie Donaldson even sooner – and Graeme McDowell and Luke Donald seem shadows of their former selves.

It is a blow that one of our brightest young hopes, Matteo Manassero, three times a teenage winner and BMW PGA champion just a few weeks after his 20th birthday, now, at 22, struggles to make cuts.

Victor Dubuisson, Tommy Fleetwood, Thorbjorn Olesen, Alexander Levy and Gary Stal, all under 26, are winners and Dubuisson has proved himself at Ryder Cup level. But how many of them have as much to offer as their American counterparts?

Call me a pessimist, but the future looks brighter on the PGA Tour. But wouldn’t it be good for the future of the Ryder Cup if two decades of European supremacy – three wins in a row and eight of the last ten – were to give way to a spell where the USA regain their sense of pride.

Great sport is all about well-matched opponents. A long series of defeats for either side does nobody any good.

Jack Nicklaus realised exactly that when he wrote to the PGA president Lord Derby after the USA had won by ten at Royal Lytham in 1977. Jack suggested that Great Britain & Ireland became Europe so that players like Seve could stiffen the resistance and put an end to monotonously one-sided contests – GB & I had won only once since 1933, at Lindrick in ‘57.

It had become such an irrelevance that Tom Weiskopf even ruled himself out and went on a hunting trip in Ryder Cup week. And although the first ‘Europeans’ got beaten in ‘79 and the second absolutely wiped out at Walton Heath by the strongest US side ever assembled (only one of the 12 had not been a Major champion), it was only a matter of time.

Once Tony Jacklin took over for 1983, the new, smartened-up, first-class Europe were given the self-belief to cast aside their long-standing inferiority complex.

That 1983 match would have ended in a tie if only Jose Maria Canizares had matched Lanny Wadkins’ last-hole birdie. The tide was turning and two years later at The Belfry, when Sam Torrance famously sank the winning putt, Europe not only won handsomely but were expected to do so.

After the turn of the Millennium, back-to-back landslide victories by nine points in 2004 and 2006 were great for European morale, but it was the excitement of the nail-biters at Celtic Manor and Medinah that really set the pulses racing.

Having by this time acquired far and away the best golfer in the world in Tiger Woods, the USA were nonplussed as to why they kept doing so badly, but the truth was that Woods, over the years, proved more a liability than an asset.

The next Ryder Cup, as we know, will be on American soil but, having won so convincingly at Gleneagles and with the world’s number one golfer on their books, it is the Europeans who are marginal favourites.

They will do well to stay that way. If you add up the combined world rankings of the current 12 leading Americans and 12 leading Europeans, it’s a no-brainer: the USA’s hot dozen totals 137, Europe’s best almost twice that at 251. Luckily for skipper Darren Clarke, there are 16 months left for those figures to come much closer together.

And, while rankings based almost exclusively on 72-hole strokeplay golf are not necessarily an accurate barometer for 18-hole matchplay where passion is as important as talent, they are still a cause for concern.

Yet the purpose of this is not primarily to talk about 2016, but about what comes after that, and I’ve assembled two under-30 teams to see what the future, circa 2020, might look like.

If such a match, mythical at this stage though it is, were to be played now – and what a good idea to give these players an early taste of mini-Ryder Cup experience – this could be the line-up.

I know which side I’d back; you may see it very differently. We could even have a terrific triangular matchplay tournament bringing in a Rest of the World Under-30s squad looking something like this:

Not so long ago it would have been a struggle to raise a World side that could make a game of it. Not so now with the Chinese at last getting a return on their enormous investment, Japan soon likely to have its first Major winner and young Koreans making their mark on both sides of the pond.

The old order changeth, and Europe has a job on to ensure it is not left behind.