Spieth: I’ve won many times on tour but I can’t imagine what winning the Ryder Cup is like

Posted on 2nd September 2016 by Adam Ellis in Featured, Features, In the Golf Paper | 0 Comments 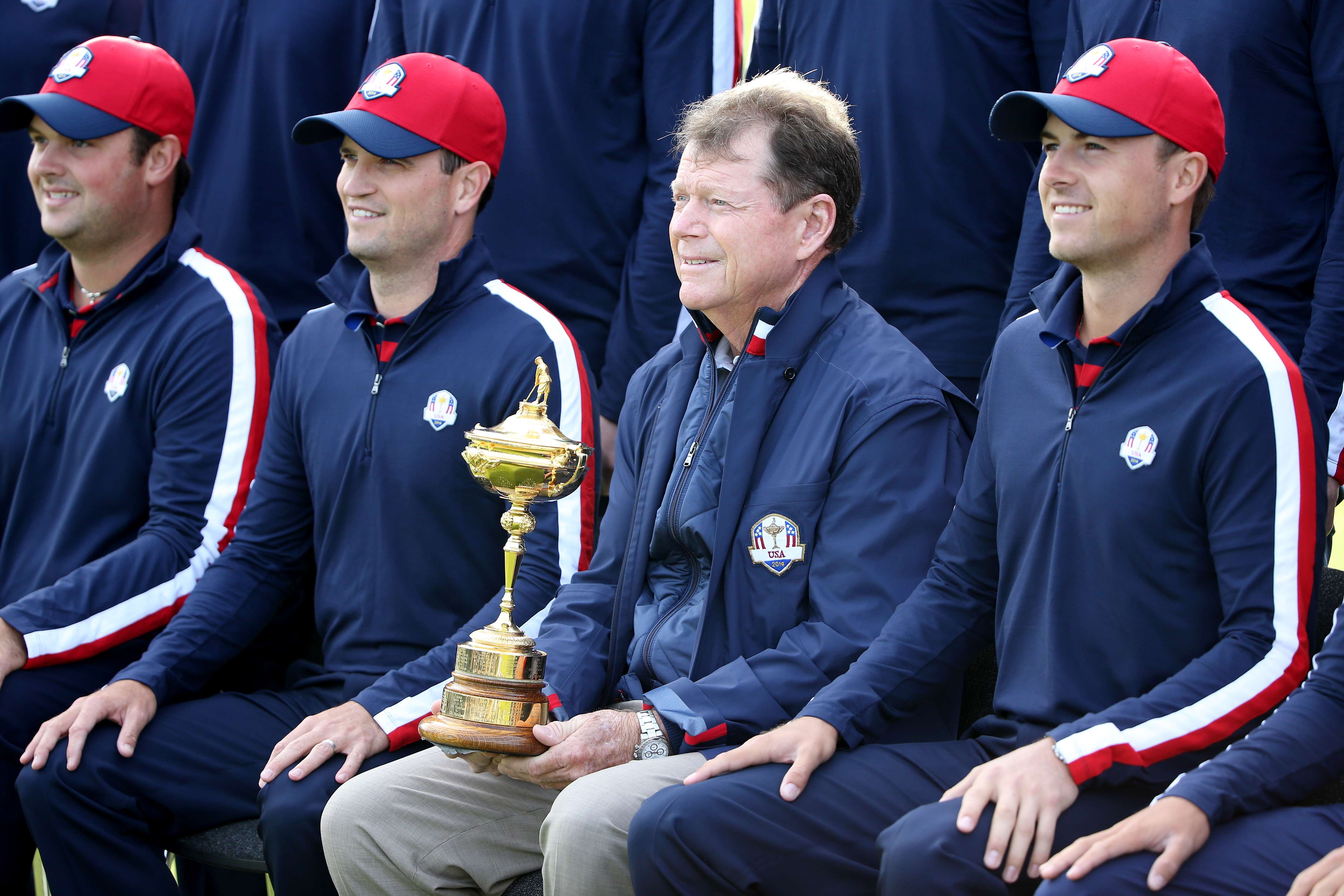 Team of individuals: The US side did not get to know each other at Gleneagles, says Spieth (Photo by Ross Kinnaird/Getty Images)

On the eve of The Barclays tournament at Bethpage Black last week, Jordan Spieth was asked to assess his 2016 season to date. The clear implication was that, for a man who had won two Major championships the previous year, the past few months could hardly be classed as anything other than ­disappointing. But, quite rightly, the 23-year old Texan – who has won twice on the PGA Tour since January – scoffed at the very notion.

Perhaps the only disappointment has been Spieth’s inability to ­contend in any of the last three ­Majors, a spill-over from the ­quadruple-bogey seven that he ­contrived at the 12th hole in the final round of the Masters last April. But, that aside, only a very few members of golf’s elite would regard a similar record as anything more than mildly discouraging.

Still, Spieth is used to such ­questioning. Amongst the leading players atop the world rankings, he stands out.

Where the likes of Jason Day, ­Henrik Stenson, Rory McIlroy, Bubba Watson and Dustin Johnson are ­similar in the vast distances that they all hit the ball off the tee, the 2015 Masters and US Open ­champion is different. His is a game built around his peerless ability to score.

“I feel like my game has ­improved each year I have been on Tour,” he says. “In every aspect. Plus, as we all know, golf is all about ­getting the ball in the hole. I do that pretty well. I take those sorts of questions as a compliment, though.

“People are always asking me what part of my game stands out most and I can never give them a clear and definitive answer. I go through months when certain parts of my game are right on. And I peak for certain rounds and certain ­tournaments. Plus, I can hold the bad rounds together because nothing gets too far off.

“I do need to become a better driver of the ball to reach the next level. The rest of it – ball-striking, short game and course-­management – has all improved.

“But my driving is not quite on the level I would like it to be. Not ­consistently. So my best weeks tend to coincide with the times when I do drive the ball well. Some guys can do really well without driving that well, but right now I’m not one of those.

“So driving is a key stat for me – and a big part of my formula for ­success on the course. If I’m driving the ball well I tend not to make ­mistakes or bogeys.”

There is more to it than that, of course. Not many top players have Spieth’s capacity for analysis. He is clearly a bright boy, one who has been heavily influenced by his younger sister, Ellie, who suffers from an undiagnosed neurological disorder that left her develop­mentally challenged.

“It’s definitely humbling to see how she is and how she lives her life,” says Spieth. “At this point, she is very much improving and holding ­conversations. She has her own ­personality and is not so reliant on other people.

“But she still has ­everyday ­struggles. She can’t hang with her friends in the way my brother [Steven] and I do, for ­example. When I think of that, I know how tough she has it. But she is happy. She smiles every day and does what she wants to do.”

Back on the course, Spieth is equally thoughtful about his own game.

“Put me in the fairway and my strengths come into play,” he ­continues. “My course-management is nearly always good, so I know when to take on certain hole ­locations and when not to.

“At Tour level you have to think your way through courses. I always aim to have a maximum of one or two over-par holes per day.

“If I do that, my birdies – one of my better ­statistics – will take care of the rest.

“I know most people tend to break down rounds in terms of shot by shot or hole by hole, but that is how I think of the game. I will do whatever it takes to limit myself to one or two bogeys.

“Then my four or five or six birdies will mean I shoot a low score. And if I do that, ­everything else – being in ­contention, winning, the trophy and money – takes care of itself.” 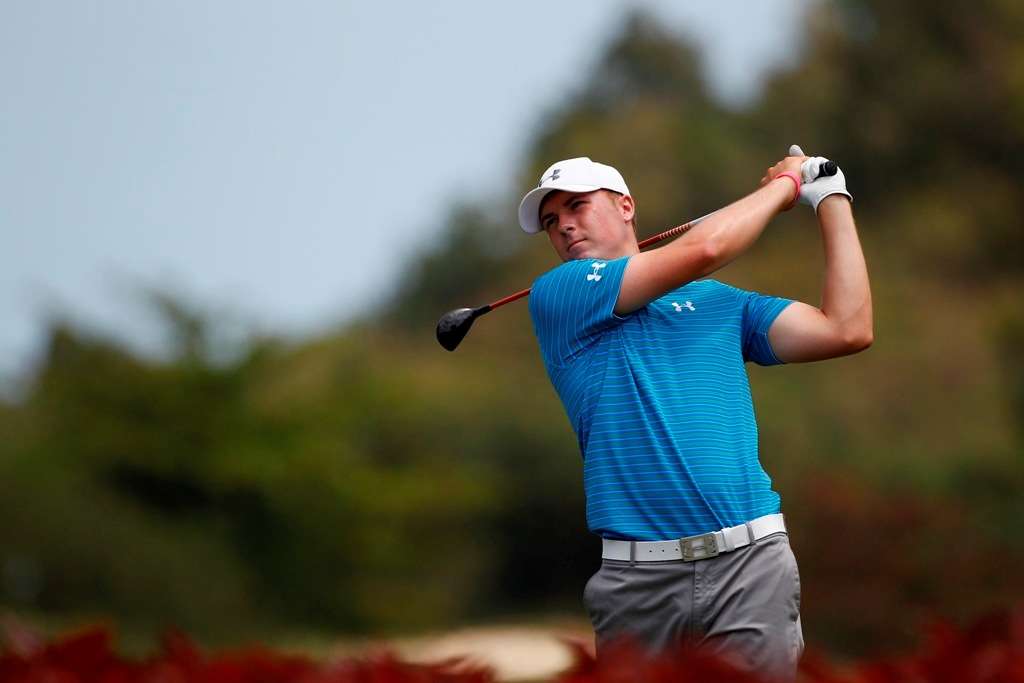 Happily too, Spieth is a huge fan of the Ryder Cup. No doubt ­irritating the likes of PGA Tour ­commissioner Tim Finchem, on the eve of the FedEx Cup play-offs, he called the biennial contest between the United States and Europe, “the next Major”.

“The Ryder Cup is where I’m looking to play my best golf of the year at this point,” he says. “I can’t wait to get to Hazeltine.

“The last match at Gleneagles was amazing. Incredible. A lot of stuff has come out since those matches, stuff that may make people think we didn’t have such a great time, but it was just out of this world. There is ­nothing else like it.

“Over the last few years I have played in the Walker Cup and the Presidents Cup and in the last group on the final day at Augusta.

“But ­nothing compares with the Ryder Cup. Nothing. The pressure on the first tee is amazing. It just shows you that none of us really think about money.

“None of us really care about that at this point. The Ryder Cup is all about whom you are representing and whom you are playing for.”

As to why recent American sides have enjoyed so much more success in the Presidents Cup than the Ryder Cup, the ever-analytical Spieth has a theory.

“The Presidents Cup is so much more relaxed,” he contends. “It is more fun. It is more about the ­experience off the course and ‘hey, we’re going to go out and win this thing but let’s take a moment to ­celebrate what have been great years for all of us.’

“The last Ryder Cup wasn’t like that at all. It was ‘this is everything.’ And that was the message we got in the team room. It was, ‘this is what it all comes down to.’

“Instead of just saying ‘hey, we’re going to beat those guys.’ I don’t know if that ­created a negative mind-set. But it wasn’t as relaxed and positive.

“I think Tom Watson was a really good Ryder Cup captain. But we just didn’t get to know each other well in the time available.

“He played a pretty full schedule of his own. And he played some PGA Tour events. But he took each of those events ­seriously as if he were trying to win another British Open.

“That’s the mark of a great champion. But it’s not necessarily the best thing for a Ryder Cup captain to do.

“I’ve been asked if it was a ­negative experience a few times. It wasn’t. But it was the wrong way to go about being positive. We all had an amazing time and we were all pretty relaxed one on one with each other. But as a team all we talked about were the matches. That’s when it got different from the Presidents Cup.

“It wasn’t any different when we were playing ping-pong or hanging with our wives and girlfriends or eating. But when it came to why we were there it was just talked about in a different way. There was too much emphasis and not enough relaxation and fun. We should have been ­celebrating our great years and ­enjoying the experience. But we never did that.”

What the Ryder Cup did do, ­however, was prepare Spieth for what he achieved in 2015.

“I can’t even imagine what it must be like to be on a winning team [Spieth was also part of the losing US Walker Cup side at Royal Aberdeen in 2013]. But we are going to go ahead and try to bring that feeling to ourselves and to our country.

“I remember the first tee-shot from 2014. Guys were taking driver because that club has the biggest head. They didn’t know where they would hit on it.

“It was an unusual feeling. I ­actually hit the longest and most solid 3-wood of my life. I was lucky though. I didn’t know where it would go.”

Which is unusual for this level-headed and immensely likeable young man. He nearly always knows where he is going.