Danny looking for victory to celebrate his anniversary

Posted on 5th May 2015 by Adam Ellis in Featured, In the Golf Paper | 0 Comments 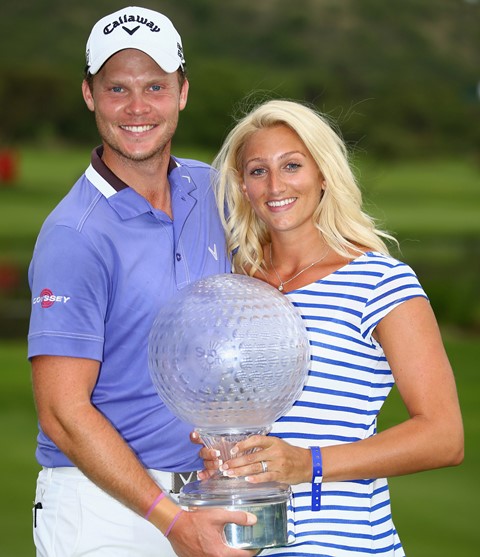 Happy couple: Danny Willett with wife Nicole and the trophy after victory in the Nedbank Golf Challenge in South Africa in December

Danny Willett knew he was going to enjoy at least one celebration when he flew off to San Francisco on Friday to prepare for today’s start of the WGC Cadillac Matchplay Championship.

On board the plane with him was his wife Nicole and his first priority on Sunday was to celebrate their second wedding anniversary, plans for which included a trip to the prison on the island of Alcatraz which has been the subject of so many Hollywood films.

Willett’s second target was to extend the year-long spurt in his seven-year career as a Tour pro which has seen him climb into the world’s top 50 for the first time and qualify for all this year’s Majors and WGC events.

But from visiting the well known as a sightseer, Willett admits he will be stepping into the unknown as he walks to the first tee at the Harding Park Club to play the first of his three group stage matchplay opponents.

A couple of practice rounds will have helped him understand the lay-out of the course which in 2009 staged the President’s Cup, but it is so long since he played head-to-head golf rather than strokeplay that he knows he will have to find new tactics for his golf.

“Since I turned pro seven years ago I don’t think I have played a matchplay event,” he said. “Not since I played in the English Amateur Championship (which he won in 2007 at Royal St George’s.

“Before flying out I haven’t been able to think about particular group matches because I was unable to find out how the seeding works for the top 64 players.

“Would there be one player ranked 1-16 in each of the 16 groups, with the players ranked 17-32 etc in the same order in the same group or just a draw for the round robin stage?”

However, turning his mind back to his triumph in Kent, Willett could certainly see two attractions in the matchplay format compared to an everyday strokeplay event.

“It doesn’t matter what the weather conditions are like,” he said. “Because in matchplay you are taking on one player one stroke at a time. Whereas in a strokeplay you can be wondering whether a wind is going to drop later in the day and help players who haven’t started their round.

“And because it’s only one hole at a time, I know I can be more aggressive with my golf and that’s the way I play.

“You can take on a shot and, if it doesn’t come off, it doesn’t matter if you make double bogey and lose a hole, because you know you can win the next hole.”

Willett was worried that his sometimes gung-ho approach might prove his undoing on his Masters debut earlier this month. But he finished in a share of 38th at Augusta to follow his tied 12th place in his WGC debut at Doral in March, and so feels he is adapting well to his first season playing all the world’s top tournaments.

“The Masters was good fun and I played some good golf on my first time there. It did help that there was some storms on two or three nights which made conditions softer. I didn’t really have a bad miss in all four rounds.

“I would have finished higher if it had not been for my putting. I had two bombs drop at the eighth (from 74 feet) and the 13th (from 64 feet) but during the week I must have missed probably 15 to 20 putts in the 12 foot range.”

Willett has not played a tournament since The Masters and admits that the cold early spring weather back in the UK has not produced practice greens of good enough quality to sort out his putting.

But,­ at the same time, the way he has started his first season in golf’s elite ranks has given him a confidence boost.

“You want to be playing against the best players in the world and in the top tournaments all the time and, since I also played nicely in the USPGA Championship last year, I haven’t felt out of place at this level,” he said. That begged the question of whether the 27-year-old has now set his sights on playing full-time on the US Tour, joining so many other European exiles.­

“Going to America is something I have thought about but at the moment I feel I am just a rookie having to rely on invites to play their tournaments.

“But after the matchplay I am going back to Europe and the next few months is going to be manic with so many events week after week, then the final four series leading to Dubai.

“I don’t want to play in tournaments like the Memorial before the US Open because that would effect my European schedule and my aim is to win it this year,” he added.

Playing well in Cadillac would be a big help because the prize fund counts on the money lists on both sides of the Atlantic.