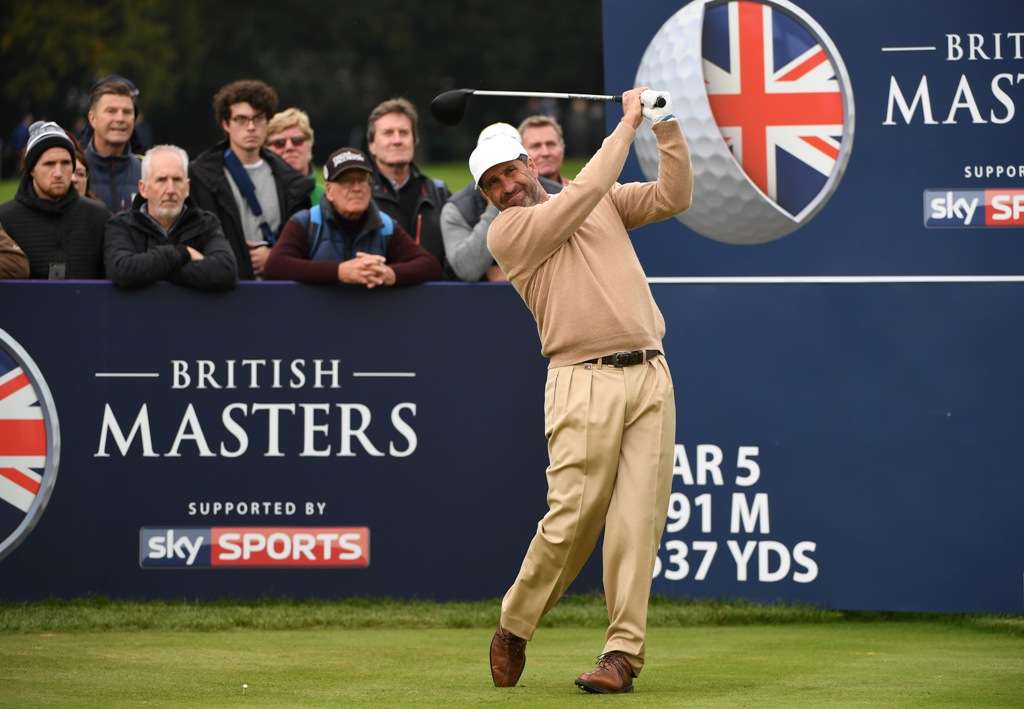 Glad to be back: Olazabal almost made the cut at the British Masters (Photo: Getty Images)

OK, so he didn’t play well enough to make the halfway cut at the British Masters. Not quite. But José María Olazábal, after 18 months away from competitive golf, ­performed with distinction, shooting 73-72 to miss out on the weekend by only three shots. And, as ever, the former Masters champion and Ryder Cup ­skipper showed great character and heart in doing so. Few ­professionals have carried ­themselves with more dignity and class.

Even under the most extreme provocation, the now 50-year old Spaniard has always behaved impeccably. Remember the aftermath of Justin Leonard’s ­infamous putt across the 17th green at Brookline in the 1999 Ryder Cup? Amid all sorts of accusations and recriminations in the wake of the American’s ill-advised stampede across the putting surface, it was Olazábal – Leonard’s opponent and the man most directly affected by the worst display of bad sportsmanship ever seen in the biennial contest – who calmed both sides of the argument that still rages today.

It is, of course, almost ­impossible not to think of the Ryder Cup whenever Olazábal is mentioned. For all that he amassed two Major championship victories – he was the last European winner of the Masters (in 1999) until Danny Willett donned the famous green jacket this year – and 30 other wins around the world, it is for his partnership with the late Seve Ballesteros that this proud Basque will surely be remembered most.

The success of the Ballesteros-Olazábal combination was built around a few common factors. Their backgrounds – both were born and raised on Spain’s often-windswept northern coast – drew them together. So did their magical short games and uncanny ability to turn three shots into two around the greens. But most of all they shared a ­passion for winning, something they did all too often as far as their American opponents were concerned. In tandem, the pair lost only twice in 15 matches together, although their amazing ability to avoid defeat actually began in more humble ­circumstances.

On the eve of the 1987 Ryder Cup at Muirfield Village, ­European captain Tony Jacklin sent out his 12-strong side to contest three nine-hole foursomes matches. “Play for some money,” commanded the former US Open and Open champion. 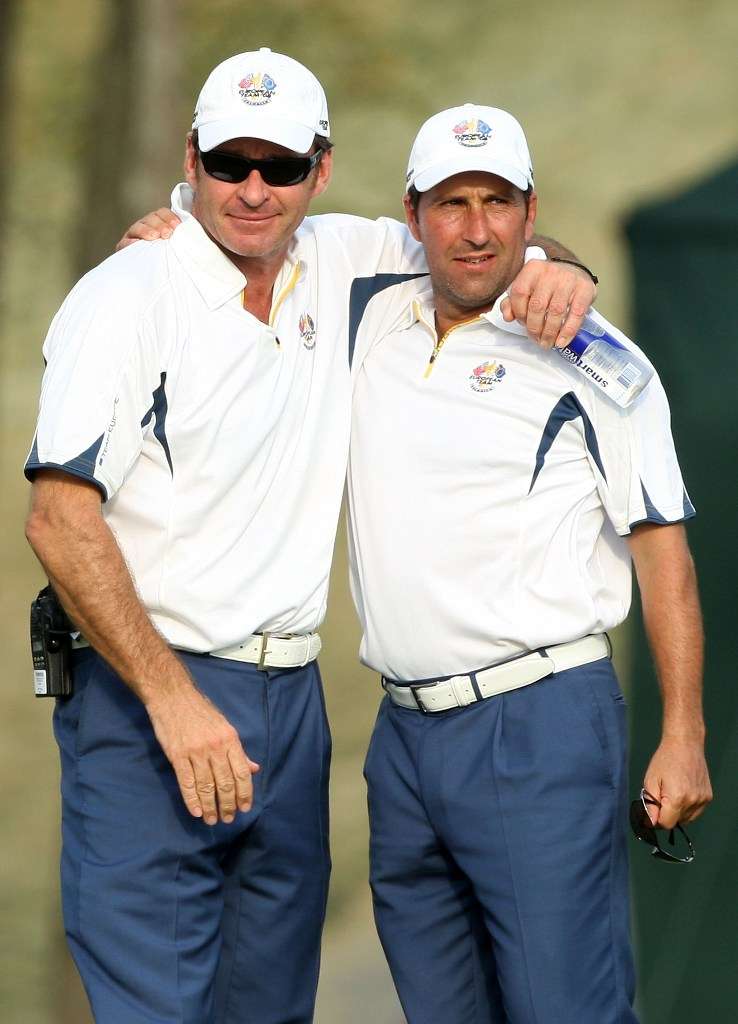 The first group out pitted Bernhard Langer of Germany and Scotland’s Ken Brown against the all-Spanish duo. It was the first time the latter pair had played foursomes golf together. But it would be far from the last.

“We were going at it for $10,” recalls Brown, who was playing alongside the three continental Europeans who have so far gone on to be appointed non-playing captain of the Old World squad.

“Whenever there was any money involved, it was serious stuff for Seve. But after seven holes – we were on the back nine – Bernhard and I were two up. Then they won the 17th when Seve holed out for birdie from a greenside bunker.

“By now the atmosphere was getting pretty serious. Bernhard was a tough competitor and so was I. But the other two were unbelievable. They so did not want to get beaten. It actually crossed my mind that it might be better if we didn’t beat them. I felt like defeat might damage their confidence. But I didn’t have to worry. Ollie holed from 20 feet for birdie to halve the match.”

One day later, Ballesteros and Olazábal came to that same 18th green needing only to two-putt from 15 feet to defeat Larry Nelson and Payne Stewart. The first putt, struck too hard by Ballesteros, finished as much as five feet past. Then, with huge pressure suddenly on his 21-year old shoulders, Olazábal rammed home the winning putt. Dead center.

“Those two putts Ollie holed were vital to everything he and Seve did subsequently,” claims Brown. “The potential long-term damage to their partnership could have been catastrophic. But, as things turned out, they provided huge boosts for Ollie and showed Seve that he could rely on his compatriot whatever the circumstances. From then on, neither one ever doubted the other.”

Eventually, no one else did either. By the time they played their 15th and last Ryder Cup match together – a 2&1 defeat of Davis Love and Tom Kite at The Belfry in 1993 – the made-in-Spain partnership had amassed 80 per cent of the points ­available to them.

“They had such great ­chemistry and determination,” says 11-time European Ryder Cupper Sir Nick Faldo. “They didn’t always win but we always assumed they would. It’s amazing how much of a lift the rest of us got from that knowledge. So, great as their record was, they were worth even more points to the team than they put on the scoreboard.

“The way they played didn’t hurt. You had to assume one of them would hole out, no matter where they were. Of course, ­getting up-and-down from unlikely spots is the best thing you can do in matchplay.”

They often did that too.

“Tom Kite and I played them in the opening four-ball match in 1987,” recalls two-times US Open champion Curtis Strange. “We had a rules meeting the night before when it was made clear players should mark if they were going to be on an opponent’s through line.

“On the first hole Ollie putts up to three feet or so, but he’s on my through line. Seve is away, just off the green. He wants José to putt. I point out that he will be standing on my through line. Seve asks if that will bother me. I tell him it will. So he shrugs, walks over to his ball and chips in to win the hole. Incredible. I almost wanted to applaud.”

According to Olazábal, that was typical Seve.

“The biggest mistake you can make is assuming you have won a hole before it is over,” he says. “At Kiawah Island in 1991, Seve and I were playing Fred Couples and Payne Stewart.

At the 16th hole, Seve had maybe a ten-foot putt for birdie. Fred was in the greenside bunker after three shots and Payne was out of the hole.

“I turned to Seve and said, ‘this is looking good for us.’ He was not at all pleased. He looked at me and said, ‘hang on a minute, let’s see what happens’. Sure enough, Fred holed his shot for a par. But Seve wasn’t surprised.

He was ready and prepared for that. And he holed his putt on top of ­Freddie. I learned a lot from him in those few minutes. There were moments when Seve and I smiled or winked at each other during matches like that. But that was the way we played.”

Eventually, the joke in the European camp was that no one could beat Seve and Ollie, such was their unyielding and ­relentless self belief.

“Between them, they were also the best caddies,” claims Billy Foster, who was on the Ballesteros bag in two Ryder Cups. “It is my firm belief that if Seve had sacked me and hired José he would have won at least three more Majors – and vice versa.

“Dave Renwick [José’s caddie] and I just let them get on with it. They talked through every shot. It was teamwork on a level I will never see repeated.”

Foster – who now works for Lee Westwood – is also responsible for the ultimate tribute to the duo.

“Billy’s Bar” in the Bingley St Ives Golf Club is ­dedicated to the 46-year old ­Yorkshireman, a long-time member.

On a wall hangs a large photograph. In it, Olazábal and Ballesteros are lining up a putt. Underneath, Foster has written: “Ballesteros and Olazábal versus God and Jesus. Seve and Ollie two up.”

As for the future, Olazábal will surely be seen more and more on the European Seniors Tour and, courtesy of his two wins at ­Augusta, on America’s Champions Tour. Which is perhaps as well. Like so many of his direct ­contemporaries, Olazábal is not long enough off the tee to ­compete on  what Lee Trevino used to call the “flat bellies” ­circuit.

“Today, golf is different and not just in terms of equipment,” says Ollie. “The players are all fit. They are stronger.

“They hit much longer drives, a talent that now has much more influence on scoring. And in future we will see more and more players with those same ­characteristics.”

The great sadness is that the game that Olazábal describes is evolving into a science, much more than the art it once was.  “There are no Seves out there, no Corey Pavins,” he sighs. “You don’t see them. They are or were the last of a breed close to ­extinction.”

The same can be said of Olazábal of course. But how great it is to have him back. We should enjoy him while we can.