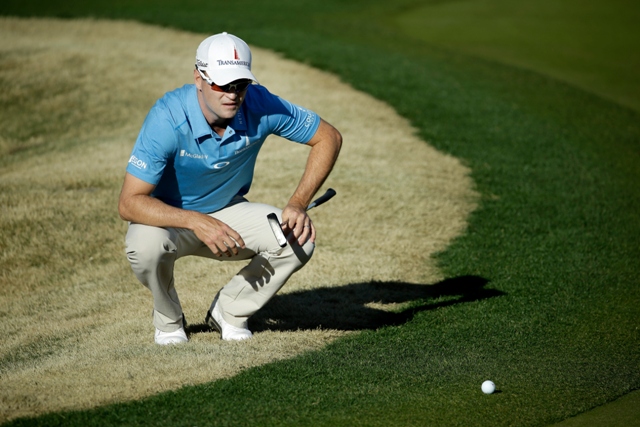 Amateur Paul Dunne, who was one of three co-leaders at the start of the day, failed to replicate the performances in his first three rounds and slipped to tied 30th after a six-over-par 78 , ending up last of the four amateurs left in the field.

Australian Jason Day, who also started top of the leaderboard on -12, missed several opportunities and will be ruing leaving a putt on the last just short to force his way into the play-off.

It was another desperately close finish in a major for the Australian, who has been second in the US Open twice and once in the Masters, but the 27-year-old’s wait for one of the ‘big four’ goes on.

Jordan Spieth, who was aiming to add the Open to his Masters and US Open titles, also missed a putt on the last to get into the play-off and the American carded a three-under 69 to finish tied-fourth on -14.

Leishman and Johnson both came from way back in the field to move to the top of the leaderboard and the duo shot 66s to sit on -15 and, at the time, a two-way tie for first.

Oosthuizen came to the 18th needing a birdie to get into the play-off and the 2010 Open champion duly obliged after sticking his pitch shot within four foot of the flag.

The three players had a quick break before heading to the first to get the four-way play-off underway and the South African, along with Johnson, sank birdies while Leishman’s par putt lipped out and he recorded a bogey.

Leishman could only make par at the next hole, but it was the American who took an early advantage after draining another birdie to move to -2, one ahead of Oosthuizen who also made par.

All three players recorded bogeys at the 17th to leave Leishman needing something special if he was to lift the Claret Jug.

The trio all bombed their respective drives down the fairway but Johnson, who was to play his second shot first, floating in a delightful chip with some backspin to leave an eight-footer for birdie.

Leishman who needed to chip-in failed with his attempt as it rolled down to the front of the green and, when Oosthuizen pitched to within ten feet, it all came down to the putting in a nervous finish.

Johnson was first to putt and the American, who knew the Open was his if it went in, missed to the right of the cup, handing the South African a chance to level things up again.

The former champion could not take the opportunity though and it meant the American won his second major title after his success in the 2007 Masters.

It was superb end to a dramatic championship which had been delayed by rain and wind over the first couple days, but it is Johnson who is the 144th Open champion.