Posted on 14th September 2015 by Adam Ellis in Golf news, In the Golf Paper | 0 Comments 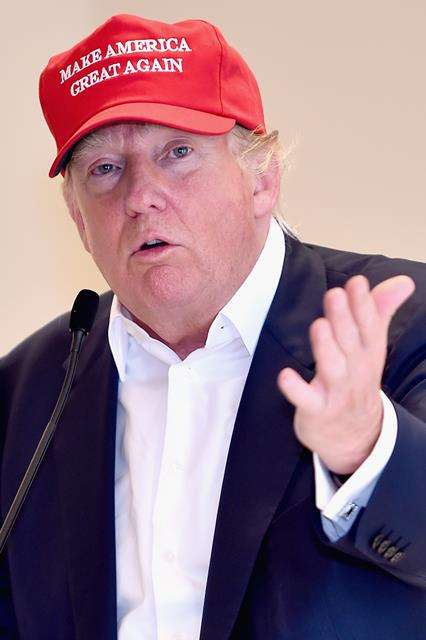 THIS YEAR’S Grand Slam of Golf has had to be cancelled after falling victim to a racism row involving American politician and entrepreneur Donald Trump.

The 36-hole end-of-season tournament, held in the past in Bermuda, spectacularly features a shootout between the year’s four Major winners.

Drawing up their schedule for 2015, the tournament organisers, the PGA of America, had reached an agreement with Trump to stage the event at his National Golf Club in Los Angeles on October 20-21.

But that arrangement came under a cloud when Trump, campaigning to become the Republican party’s candidate in next year’s Presidential election, made a racist remark about Mexican immigrants illegally crossing the border into America.

Trump caused a furious reaction worldwide when he said: “When Mexico sends its people, they’re not sending their best.

Not only did the row cause PGA officials to start scratching their heads, but there was also speculation that the Ricoh Women’s British Open, held at the Trump-owned Turnberry resort in Scotland at the end of July, might have to be cancelled. In the end, it went ahead with some muted protest, and was won in style by the world’s number one female golfer, South Korea’s Inbee Park.

But worried about the political fallout and the potential of protesters disrupting players like current world No.1 Jordan Spieth out on the course, the PGA decided to cancel its plans to hold the Grand Slam in Los Angeles.

And it has now been forced to admit that it has been unable to find a suitable alternative venue.

The original cancellation of Los Angeles was explained in a statement issued by Trump’s presidential campaign office.

It said: “Due to the controversy surrounding statements made by Mr Trump having to do with illegal immigrants pouring into the United States from Mexico and other parts of the world, Mr Trump does not want his friends at the PGA of America to suffer any consequences or backlash with respect to the Grand Slam of Golf.”

In a statement the PGA said this week:“Due to the timing and logistics needed to stage the PGA Grand Slam of Golf to the highest standards, we are disappointed that we will not be able to conduct the event this year.

“This was a memorable year for Major championship golf and the PGA of America congratulates Jordan Spieth, Zach Johnson and Jason Day on their impressive wins.

“We look forward to conducting the PGA Grand Slam of Golf in 2016.”

Meanwhile, the timing of the announcement could not be more ironic for Germany’s Martin Kaymer.

Because Spieth had won both this year’s Masters and US Open Major titles, Kaymer had been invited to complete the four-man Grand Slam field because he won the US Open in 2014.

Now that door has been closed firmly on him just a week after he learned that he had lost his US Tour playing privileges for 2016 after failing to play the minimum of 15 tournaments Stateside this year.