Posted on 5th October 2015 by Adam Ellis in Golf news, In the Golf Paper | 0 Comments 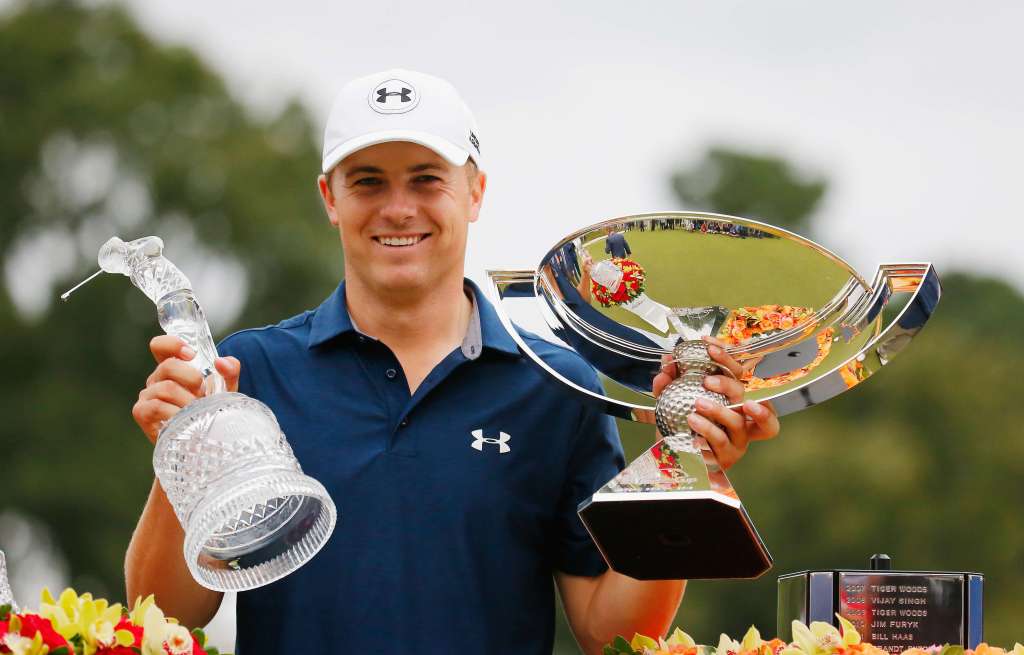 IN the end, Jordan Spieth settled all the arguments. Despite having one of the greatest years in the history of golf, the 22-year-old Texan came into the final event of the season, the Tour

Championship, with some doubters questioning his right to be named Player of the Year.

What if Jason Day, the brilliant Australian, who had taken over as the world No.1, finished his own spectacular year in style by claiming the FedExCup? Would that not make him more worthy of the players’ vote for 2015’s finest?

The debate was irrelevant. Spieth put the exclamation mark on a simply stunning campaign by rediscovering the form that marked him out as a special talent, winning the Tour Championship by four shots from an international trio of Henrik Stenson from Sweden, Danny Lee from New Zealand and England’s Justin Rose. And he did so with another jaw-dropping display of putting, which added further evidence to the claim that he is the greatest wielder of the flat stick in the modern era, possibly of all time.

No wonder he should say after collecting his £6.5m of winnings at East Lake: “This one I can’t wait to celebrate. This is incredible.”

In familiar Spieth style, the young man who has given American golf a massive lift in the post-Tiger Woods era, added  another record to his CV.

Even without the $10m bonus, his total winnings of $12,030,465 were more than anyone had ever earned in a single season. His grand total of more than $22m – which equates to more than £14m – came from five victories (including the Masters and US Open), four runners-up finishes and six more top-tens from his 19 starts.

At East Lake, he was the only player to score under par in all four rounds. He gained the most strokes in putting and scrambling and sank an astonishing total of 433 feet of putts as he reeled in halfway leader Stenson and surged on to a commanding victory. And all of this came after the worst slump of his professional career, when he missed the cut in the first two Playoffs and had people questioning whether he was a bright young star who had burned himself out.

Spieth admitted he was frustrated and angry at his loss of form  and, by his own admission, was humiliated by the manner in which he had been outplayed by Day’s big-hitting and low scoring.

His response was to knuckle down, ignore the distractions  and revert to his brutal practice regime of holing 1,000 putts a day and hitting 1,000 bunker shots. He arrived at East Lake early and on the Monday was one of the few players on the course practicing his short game and getting accustomed to the Bermuda greens.

But mostly he had got his mind right. The unwelcome thoughts about his achievements, past and future, which had entered his head were banished while he concentrated on the matter in hand. He treated the Tour Championship like a Major, expected to win – and win it he did.

“I didn’t have a great Playoffs,” Spieth said in reference to his two losses. “But I put a lot into this week. Mentally I stayed in it. And, boy, that putter sure paid off.

“It’s validation of the year. It’s validation to these Playoffs and how you can go through the lows of a season so quickly after you’re so high. People can give up on you easily. And to not care about that, to worry about your own stuff and to come on to the brightest stages  and perform is going to give me a lot of confidence going forward because there are going to be ups and downs, I know it. But to able to bounce back this quickly from the low in my season is really cool.

His caddie Michael Griller sensed the determination in Spieth to round off an exceptional year by proving to anyone who doubted he was the real deal. “We both believed that he was going to win,” said Griller. “He felt the pressure to finish off the season, felt like he had one of the best seasons in the history of the game and felt somehow it would be a let-down if he didn’t win it. He wanted to put a bow on it. He wanted to finish with an exclamation point.”

Spieth set the stage by grabbing the lead at the end of the third round. Stenson, after opening with a 63, led the tournament from the third hole until the 54th and appeared to be on course for a record-equalling second FedExCup victory, having proved an able front-runner in the same event two years ago.

Yet while the rest of the chasing pack  would surge forward only to fall back, Spieth had other ideas. His 15-foot birdie putt on the 18th on Saturday evening, which completed a round of 68 and took him to the head of affairs, confirmed he was the man to beat. Heavy rain throughout Friday and Saturday, while not deterring the large enthusiastic crowds,  had made the 7,307-yard  course long, muddy and difficult, requiring accuracy and patience in the testing final round.

Spieth made his mark early, establishing a two-stroke lead at the second, where his four-iron from the tee stopped ten feet from the pin before the inevitable putt was rolled in. But the leader was to suffer his only crisis of the day on the fifth and sixth, where he racked up successive bogeys – duffing a chip at one and, surprisingly, three-putting the next (for the first time in 86 holes). 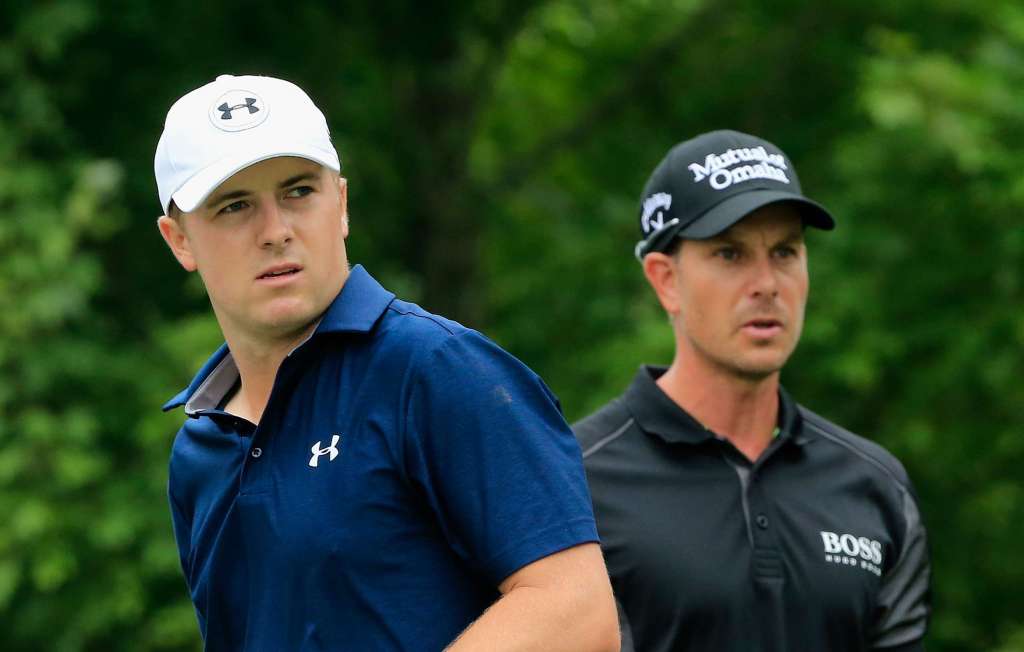 Reeled in: Stenson made the front running for 54 holes (Photo by Sam Greenwood/Getty Images)

Stenson, who had been plodding along, sticking to his game plan of taking three-wood off the tee for all the long holes, found himself back in a share of the lead having made an excellent save at the fifth where his speedy, downhill chip hit the flagstick to enable him to hole a ten-footer for par.

But the contest was to swing decisively  in a dramatic four-hole stretch from the eighth with Spieth twice tearing the heart out of his opponent with moments of magic. There was a two-shot swing at the par-four eighth where Stenson drove into trees on the right and made a bogey while Spieth capitalised by holing a 20-foot birdie putt. Stenson looked likely  to close the gap at the 600-yard  par-five ninth when he pitched to two feet only for Spieth to beat him into the cup with a 15-foot downhill curler.

Both players then bogeyed the tenth, Spieth surprisingly missing a five-footer for par after pushing his approach shot right of the green. But the Masters and US Open champion memorably atoned for that error at the 11th. Again Stenson was odds-on to make up ground with an approach to four feet but Spieth holed from 46 feet for his own birdie. Although Stenson duly holed out, he could only smile ruefully and give Spieth a congratulatory fist pump, knowing this was not going to be his day. A bogey at the 12th, where the pairing were put on the clock, meant the game was almost up for the European challenger.

All that was left was to decide the margin of victory. Stenson, having fought valiantly, appeared to run out of steam in the closing stages, possibly worn down by the dagger blows of his opponent. At the 17th, he hit a wild shank over the heads of startled spectators  and took a double-bogey six, but then ridiculously holed a 50- foot birdie putt across the 18th green  to ensure a share of second place with Rose and Lee.

Spieth completed the job with an immaculate nine-foot putt on the 18th for a round of 69 before being engulfed by his joyous family as he prepared to accept his financial windfall and return to the pinnacle of his sport.

Lee, 25, another of the young brigade who has had a breakthrough year, surged up the field with a closing 65 while Rose even looked a possible winner after four birdies on the front nine took him to within two of the leaders.

But then the Englishman pulled his drive out of bounds at the tenth – distracted by a noise from the crowd – and dropped back before recovering well to shoot 66 and professing to be excited about a new approach which he believes can take him “to a new level” in 2016.

Rory McIlroy, five back at the start, had a frustrating day mixing outstanding shots with careless mistakes. Four bogeys on the front nine ended his hopes and although he recovered on the inward half, a pulled second shot found water at the 17th and led to a triple-bogey seven, a final round of 74 and a tie for 16th, ten shots behind Spieth.

The Northern Irishman will be desperate to bring down Spieth in 2016, as will Day, who tied 10th after failing to recapture the sparkle of recent weeks.

The Aussie said: “For both of us to have five-win seasons is pretty good. It’s kind of like the Tiger and Phil era when they used to put that stuff together. Now it’s our turn.”

There may be others, McIlroy included, who will argue with that theory.

There’s no doubt it will be exciting, but as Spieth’s father, Shawn, said: “It’s a been surreal year. I don’t want to be part of the team responsible for writing a better plan for next year.”

The future will take care of itself. But the present belongs to Jordan Spieth.