Chapman column: Was Poulter ever going to get a spot as one of Europe’s 12? 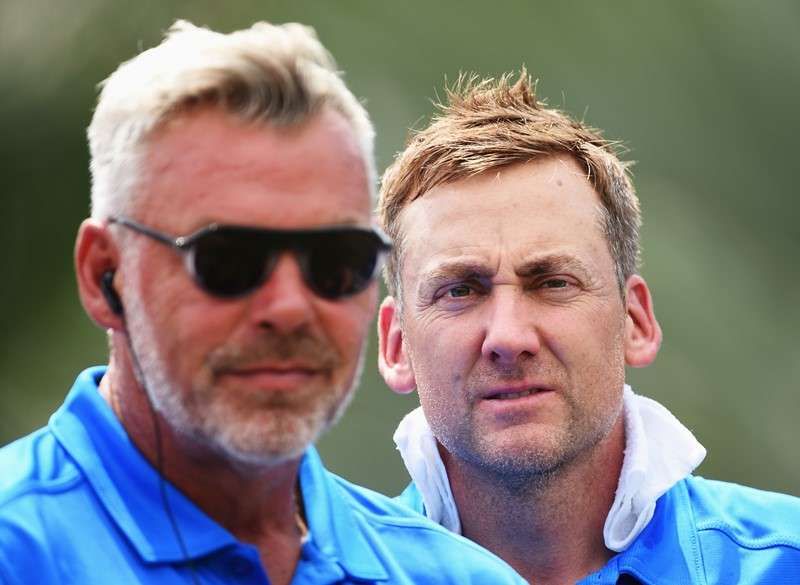 Background role: Poulter was always likely to be a peripheral figure in Hazeltine this year (photo by Getty Images)

Really tough luck on Ian Poulter to have to find that a ­worsening of an arthritic ­condition in his foot will ­sideline him for a lengthy spell and prevent him challenging for a sixth Ryder Cup place.

But the good news is he will be an ­inspirational vice-captain to Darren Clarke and a terrific team-room asset at Hazeltine. But, seriously, was he ever going to play anyway?

Goodness knows, Europe need his ­passion in some capacity, but the likelihood of him qualifying for the side had been receding week by week.

Chris Wood’s big win at Wentworth and ­Russell Knox’s Irish Open second to Rory McIlroy had already pushed him further down the pecking order before last week’s bombshell. The arthritis has clearly been compromising his form for some time and he had nothing left to fight back with.

Nobody has served Europe better or made more of a limited talent than this admirable golfer, the inspiration for the Miracle at Medinah in 2012 and a massive contributor to that knife-edge Celtic Manor victory two years earlier.

Nor do we forget, even though the team performance under Sir Nick Faldo’s ­unorthodox captaincy left much to be desired, what a dazzling wild-card pick he was at Valhalla, winning four from four when all around him the bigger European names were crumbling.

But that was then, this is 2016. He didn’t win a match at Gleneagles two years ago. He was unusually subdued in Scotland and his game has dipped again since then.

This talismanic Beau Brummell of British golf is always honest about himself and his Twitter followers have long known how much he was hurting, mentally and now physically, from this inability to make ­himself a credible contender.

He’s only one of four heroes from ­previous Ryder Cup glory days who are under the cosh: Graeme McDowell, Martin Kaymer and Jamie Donaldson, the trio who scored the clinching points in the last three Cups, are feeling the heat as well.

At least Kaymer has come back to life with three top tens in a row and ‘G-Mac’ did grab a minor PGA Tour victory towards the end of last year. But the case for Poulter was becoming harder and harder to make.

Now we know it was physical pain that was at least partly responsible for a series of horrendous performances like that third-round 82 at the Masters and a 79 at a similar stage of The Players Championship.

Having swerved Wentworth – the biggest tournament in his home country – because of his record there, the agony of missing the cut so badly at Colonial, must have cut deep.

The 73-77 he shot on a track where he’d often done decently before brought him to 35 OVER PAR for the six tournaments that he had played in the US starting with the Masters.

Taking his record back to the turn of the year, he was 39 over for all 13 starts ­(including his one visit to the European Tour for 14th in Abu Dhabi) with only a third place in the low-key Puerto Rico Open showing up on the credit side.

Pulling out of Memorial immediately after that Colonial flop was a heavy hint that something was seriously amiss.

On Monday he was due for a double shift in a 36-hole US Open qualifier in­ ­Jacksonville but if the foot was having ­trouble with 18, it would have been ­foolhardy to try a gruelling 36.

So the lucrative next few pre-Olympic weeks into which three Major ­championships are being squeezed in were out of bounds, and Poults’s Ryder chances were all but out of the window.

But, let’s face it, he wasn’t going to make it on any of his form in the first five months of the year. The golden putting stroke that triggered Europe’s comeback of all ­comebacks at Medinah had become a ­distant memory and at 91st on the putting chart and the wrong side of 40, he had never been more vulnerable.

Although his army of supporters will argue that put him in a Europe shirt, set those bulging eyeballs on to a few Yanks and the bulldog spirit of his matchplay genius would resurface and make ­nonsense of those negative stats, Poulter knew that he could not rely on Clarke seeing it that way.

Maybe his fighting heart has run its race as far as the Ryder Cup is ­concerned. No disgrace in that. He has had to work much harder than players of greater gifts to stay in touch. A toll was taken.

Faldo was shrewd enough to walk away early from the playing side of the game once he knew that the magic had gone. Sir Nick’s last solo victory came when he was a year younger than Poulter.

Colin Montgomery was another who finished as a ­high-level contender in his early ­forties, winning once after the age of 42, but he ­struggled on making a few cuts and ­missing a few more until the time came when he could punch his weight again in the more forgiving world of the Champions Tour.

There’s no set guaranteed time for ­staying a star and it could just be that Poults has scaled all the heights he’s going to – and this is a stubborn guy who proved ­himself over and over again as a world-class solo performer beyond the confines of the Ryder Cup.

Nothing has ever come easy to him (outside a gift for publicity!), it’s all been hard, hard graft. Poults has always had to go the extra mile to stay in touch with the power men and maybe the body is wearing out.

He would absolutely hate to play in a Ryder Cup and be little more than a mascot. Paul McGinley’s side were so superior that they didn’t need a Poulter rearguard action to pull off a miracle, but he knows the next Europeans go in as underdogs and won’t be strong enough to carry a passenger.

McGinley risked a riot if he’d not granted Poulter a pick after his Medinah heroics. Without any Poulter heroics at Gleneagles to consider, Clarke faced no such dilemma.

It will hurt, and hurt bad, but, if it is the end, this heart-on-the-sleeve folk hero can stand tall and proud of all he has achieved as a model professional and as one of the gutsiest battlers any of us will ever see.

And, whatever happens, he’ll still be at Hazeltine with a big part to play. Captain Clarke will see to that.

*This article was originally published in TGP on 8 June 2016.