Golfing etiquette – It’s in our jeans 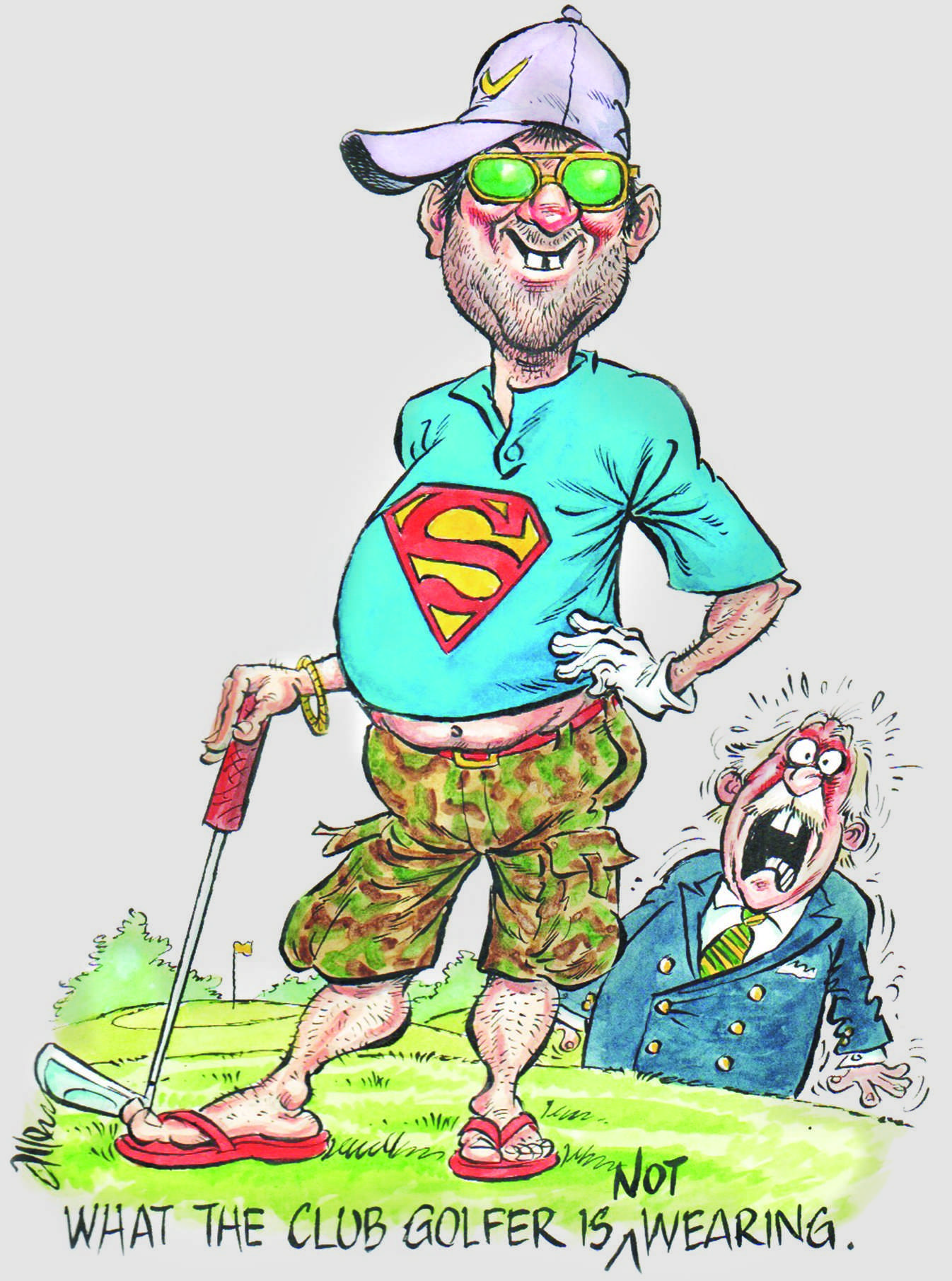 “In my book, anyone over the age of 70 wearing shorts on a golf course should be subject to a two stroke penalty.”

The atmosphere around the table in the clubhouse was pretty sombre as I sat there discussing one of our regulars. “I’m afraid I can’t play with Chris any more after his behaviour on the course yesterday” I said. “Good Lord” came the reply. “What was he up to? Not teeing his ball up in the rough or anything?” “Far worse than that” I replied, leaning over to whisper in order to keep the grim revelation from the occupants of the adjacent table. “He had his trousers tucked into his socks.”

There followed, as I’d anticipated, an outburst of mock outrage from my companion. “You don’t say? Chris of all people. “Who’d have thought it?  You’ll be telling me next the bounder turned up for the monthly medal wearing a collarless shirt. In that case I think you’d better add me to the list of his former playing partners.”

The course, it has to be said, had been particularly swamp-like after a night of heavy rain, and Chris was merely attempting to keep the mud off his trousers. However, less charitable golfers than myself might have written a stern letter to the committee at this flagrant contravention of the club’s dress code, rather than settling for the more lenient option of blackmail.

It could be just co-incidence, but after informing Chris that evidence of the infringement had been captured via a photograph on my mobile phone, every time I get to within five feet of the hole, he says: “that’s good” and concedes my putt.

The debate about declining participation in the game has taken another serious turn with Nike pulling the plug on the equipment side of their golf business, and while the time it takes to play a round and prohibitive costs are top of the list of suspects, not far behind is the association between golf and archaic rules and regulations. Dress codes included.

More and more clubs now take a more relaxed view of golfing apparel, which is mostly welcome, although in some areas there’s a case for returning to the Old Tom Morris school of outfit. Such as seniors wearing shorts. You’d have to say that the sight of all those old boys congregating around the first tee, with the varicose veins on alabaster legs making the lower half resemble an AA road atlas, is not exactly conducive to persuading youngsters that this is a sexy sport, and well worth taking up.

In my book, anyone over the age of 70 wearing shorts on a golf course should be subject to a two-stroke penalty on every hole they’re worn. You’d almost go as far as to allow jeans instead, unless of course they’re the sort with holes in the legs, or – and this would cause understandable outrage in the ladies’section – designed to hang so low that the major feature on display becomes the underpants.

One thing about golf, for those who prefer to play in jeans, t shirt, and – if they so choose – a pair of farmer’s wellies, is that they have a choice. A restricted one, maybe, but nonetheless a choice. There are any number of golf courses in Scotland, for example, where you can turn up looking like Worzel Gummidge and get a game, but best not try it at places like Muirfield or Loch Lomond.

Same deal in America. A friend of mine once turned up to make a booking at Pebble Beach, and asked about the dress code. Only to be told: “buddy, you got 300 bucks in ya wallet, you can wear what ya like.” Conversely, if you’re fortunate enough to find yourself invited to play Augusta with a member, the member is obliged to accompany you at all times while on the premises. Ergo, if you’re caught short and need to nip behind an azealea bush for a minute, your benefactor – under club rules – has to come and watch.

A small price to pay, you might think, for being able to bore everyone at the bar once you get back home about how you negotiated Amen Corner in 12 over par. No hardship either, in return for a round at Muirfield, being required to wear a jacket and tie for lunch. Just don’t try hanging your jacket on the back of your chair. You’ll be told – politely of course – to put it back on.

I thought it might be an idea to pick a private club at random and check their rules, and didn’t have to travel far down the list of those beginning with A to find one which could reasonably be thought to be just the stuffy side of traditional. You might even recognise which club with the initial A it is.

Members and guests  are respectfully asked to observe the dress rules and traditions of the Club. At lunchtime and after 6.00pm, jackets and ties are normally required to be worn by gentlemen in the dining room. Any form of jeans, training shoes, track suits or t-shirts are not permitted on the course or in the Clubhouse.

Must have a collar and be worn tucked in at all times. Rugby or football shirts are not acceptable nor are shirts with garish patterns or over-sized logos.

Must be tailored with no external pockets, zipped pockets or tags.  No jeans of any description are allowed, irrespective of brand, cost or variant of denim (colour, brushed, stretch, etc.).

Must be tailored and just above the knee.  No “cargo” (external pockets), tennis or beach shorts.

Short white socks, with or without discreet logo, and four inches in height from the upper shoe line. Hidden and quarter socks are not allowed.

Long socks with turn-over tops. No rugby or other sport socks.

Should only be worn with the peak at the front and should not be worn in the clubhouse.

The above dress code applies to the course, practice ground and clubhouse.  In addition the following should be noted regarding casual dress in the clubhouse.

Lace-up or slip-on non-spike shoes should be worn with socks. No sandals, trainers or flip flops.  Golf shoes are allowed in the bar provided it is accessed and exited by the outside staircase.

Crikey, just imagine being caught wearing your golf shoes on the inside stairs. And I especially like the bit about the socks having to be “four inches” (not three or five mind you) “from the upper shoe line”. So from now on, just make sure you don’t risk shrinking your golf socks by putting them in too hot a wash. Otherwise, you risk the awful humiliation of having the course superintendent drive up in a buggy, jump out brandishing a tape measure, and frogmarch you from the premises.