Mahoney column: Captains are either heroes or villians

Posted on 5th September 2016 by admin in Features, In the Golf Paper | 0 Comments 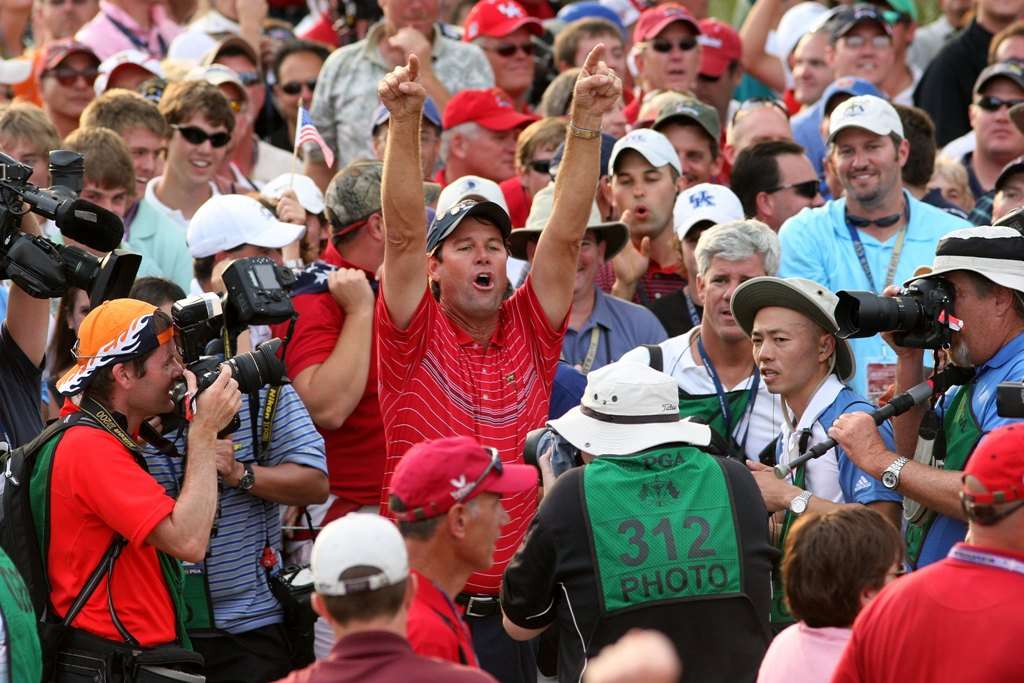 Podswallop!: Some people said that the US won in 2008 because Paul Azinger split his team into Navy Seal-style pods of four (Photo by Getty Images)

So Darren Clarke has picked his three Ryder Cup wildcards and we’ll discover in just a few weeks’ time whether he will be remembered as the great Captain Fantastic or the disastrous Captain Cock-Up. Both headlines have been written and are awaiting the final score from Hazeltine.

None of this is fair of course but Clarke and all the others who have been captain know the deal they struck with the devil. “It’s a Catch 22,” Clarke says. “You can be the best captain in the world and lose or an awful captain and win. That goes with the territory.”

It’s been stopping Clarke from getting a good night’s sleep for almost two years. “I wake up at night with ideas and write them down,” he says. “Some of them are great and some are stupid. Probably the majority are stupid. I write everything down. Bits and pieces.

“In the notes page on my phone, too. There’s nothing more powerful than the written word. Information is king.”

Top of the list on his bedside table notepad should be the following: “Plan A, B and C: Make Sure The Players Hole More Putts And Make More Birdies Than The Americans.” Nothing else Clarke does will have as much of an outcome on the result.

His counterpart, Davis Love, knows it, too. Everyone knows it. But everyone seems compelled to perpetuate the myth that the captain makes the difference. “Win – you’re a hero. Lose – you’re a goat. Said that from day one,” Love said.

In his new book, ‘The Captain Myth: The Ryder Cup and Sport’s Great Leadership Delusion’, Richard Gillis investigates, “One of the most nuanced and ambiguous leadership challenges in world sport. At the Ryder Cup, two myths are created. One is a good captain. One is a bad captain. Leadership has become an obsession.

“The more we cultivate it, the more we misrepresent what leadership is and the way teams work,” Gillis says.   “I am not saying leaders are irrelevant but they are overrated.” Rory McIlroy was rather more blunt: “It’s not rocket           science.”

Europe’s blueprint that has helped win eight out of the last ten matches is as useless as the USA’s task force that was set up after defeat two years ago    in an attempt to discover a blueprint. Many believe Paul Azinger’s 2008 USA team won because he split his 12 into pods of four based on Navy Seals’ battleground tactics. Podswallop!

Europe didn’t lose either because Nick Faldo got the names of his players mixed up and had DJ Spoony as an assistant. The result always comes down to the players. Many, including captains, will have us believe that part of what makes a great captain is the ability to work out the pairings that work like magic.

But three-times captain Bernard Gallacher speaks the truth and busts the myth. “I had ideas of partnerships but it all went out of the window when the Ryder Cup started,” he said. “If you have 12 playing well, any two should be able to play together.”

That all makes perfect sense. The USA used to put Tom Watson and Jack Nicklaus out together and they beat their British and Irish opponents for fun before Jack suggested, presumably because he was bored, that GB&I might like to invite Europe to the party to make the contest more interesting.

Enter Seve Ballesteros and Jose Maria Olazabal. Exit Jack and Tom. It didn’t need a genius captain to fit the Spaniards together. Best two players – out you go and win us a point. They played in 15 Ryder Cup matches and only lost twice.

US captain Hal Sutton followed the same simple plan in 2004. He paired Tiger Woods and Phil Mickelson. How’s that for intimidation? Played two, lost two. The players let their captain down but ‘Hapless Hal’, as he was dubbed, took the blame.

Bernhard Langer has a more cerebral approach to the question ‘what makes a great captain?’ “To be a leader and a servant to the team. To understand whom you are dealing with, put yourself in their shoes and find out what makes them tick. Make sure they are happy and informed. Find out what they like and don’t like.

“There are two ways to be a leader. You can lead with love or fear. And it’s the same for all sports teams and big companies, too.”

But you can’t hit the shots for them, Bernhard, or hole the putts. Mark James has a more realistic understanding of the myth of the captain’s role. “You have to be inspirational as well as quiet, depending on the circumstances. The Ryder Cup can be utter chaos. People don’t know what they are doing.” Quite.

Tony Jacklin is lauded for making the contest more even on a psychological level by insisting the team flew on Concorde and had all the best new gear like the Americans. But even Jacklin admits the secret to his success was not his genius but luck.

“European golfers were about to have a fantastic era with Seve Ballesteros, Nick Faldo, Bernhard Langer, Sandy Lyle and Ian Woosnam. And then they asked me to be captain!”

Clarke knows every decision he makes will be analysed to death. That process only intensifies this week with debates on why he picked this one and why he left that one out.

But Clarke has on his team a former captain who knows the secrets that will save Clarke’s reputation and bring victory for Europe.

Some thought it was strange to appoint Sam Torrance as one of his vice-captains but Clarke knows that the Scotsman can stand up on the eve of the Ryder Cup and deliver the killer motivational mantra.

Torrance knows it’s not about the captain. What makes a great captain? “Winning,” he says. He knows it’s all about the players. “Out of the shadows come heroes,” Torrance said at the Belfry in 2002.

“And that’s all there is to it,” as Bruce Forsyth said in ‘The Generation Game’.