Posted on 8th October 2016 by admin in Featured, Features, In the Golf Paper | 0 Comments 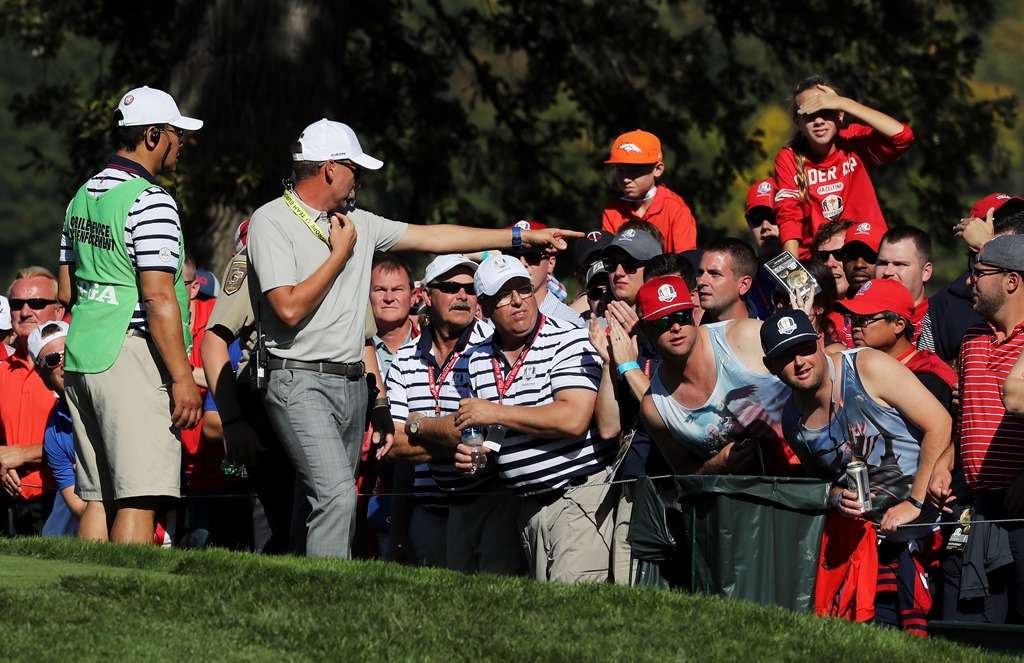 Disappointing: The crowds at Hazeltine contained an abusive element, despite most fans upholding golf’s reputation (Photo by Getty Images)

HE WAS trying to be funny. And clever. And satirical. But, unfortunately for Pete Willett, he got two things wrong when he sat down to pen his ultimately controversial Ryder Cup column for National Club Golfer Magazine.

And second, the timing of his stream-of-consciousness views on the sartorial, verbal and culinary habits of Uncle Sam’s nieces and nephews in the run-up to his younger sibling’s debut in golf’s most high-profile and invariably contentious biennial contest was either naive or unthinking, depending on one’s capacity for outrage.

For those who have been living in a cave for the past week, here is a sample of what the elder Willett had to say:

“(Europe) need to silence the pudgy, basement-dwelling irritants, stuffed on cookie dough and pissy beer, pausing between mouthfuls of hot dog so they can scream ‘baba-booey’ until their jelly faces turn red.

“They need to stun the angry, unwashed, ‘Make America Great Again’ swarm, desperately gripping their concealed-carry compensators and belting out a mini erection-inducing ‘mashed potato’, hoping to impress their cousin.

“They need to smash the obnoxious dads with their shiny teeth, Lego-man hair, medicated ex-wives and resentful children. Squeezed into their cargo shorts and boating shoes, they’ll bellow ‘get in the hole’ whilst high-fiving all the other remembers of the Dentists’ Big Game Hunt Society.”

Strong stuff. But here’s the thing. While this man, who teaches drama to high school children, can legitimately be accused of veering into language that was at least intemperate, events over the three days of the Ryder Cup did much to validate the central thrust of his piece.

Sadly, the crowds at Hazeltine, while dominated by real and true fans with no agenda other than cheering for their team, contained a sizeable rogue element, one seemingly ignorant of golf’s peerless and traditional etiquette. Time and time again matches were scarred by incidents that had more in common with football contests, so vitriolic and abusive were the exchanges between spectators and players.

Much of the problems were, inevitably, alcohol-induced. The number of empty beer cans littering the premises was testimony to that unsavoury truth. Besides, how else can we explain what happened on Saturday afternoon by the seventh green? It was there that a member of the gallery – let’s pray he isn’t a golfer – screamed “suck a dick, Rory!”

In the 45 seconds or so before the security men hauled away the miscreant, McIlroy was up to the challenge. “If you want to back that up, I’m right here,” said the young Irishman.

Thankfully, physical confrontation has yet to darken the Ryder Cup’s door. But it would be best not to get complacent, even if so much of the yelling and screaming has more to do with adolescent attention-seeking than anything else. Which is not to say that the nonsense was confined to the young. The gentleman screaming “go, go, go” as a European ball trickled slowly down a slope away from the hole on the eighth green was easily into his 60s. Such vein-popping exhortations towards an inanimate object are not the actions of a rational person. Or, one must suppose, someone who has played golf for any length of time.

More amusing was the old line that says: “If it wasn’t for us (Americans), you (Europeans) would all be speaking German.” Which is fair enough, except when it is directed at former US Open and PGA champion Martin Kaymer, native of Dusseldorf.

Still, for all that McIlroy was a regular target for the many boorish buffoons located within the vast galleries (the Ryder Cup, by the way, must be the worst ticket in all sports given how little the spectators are able to see because of the grotesque level of overcrowding), the man with the biggest bullseye on his back was inevitably the Masters champion.

It is not certain that Danny Willett’s inability to make much impact at Hazeltine had everything to do with his brother’s penmanship and nothing to do with the fact that he was struggling with his game, but it would be silly not to think it had some effect on his play.

He said all the right things, of course. “I was disappointed in what my brother wrote. He’s an outside person expressing an opinion that is not representative of my own thoughts.” Europe skipper Darren Clarke did the same: “That is not what Team Europe stands for.”

But it made little difference. The relentless and puerile heckling of a young man making his Ryder Cup debut was not exactly to Minnesota’s credit. Even Willett’s mother, watching from inside the ropes, was subjected to moments of unacceptable barracking.

Still, it would also be wrong to single out this Ryder Cup as a new nadir for the biennial battle. We’ve been here before. In 1991 at Kiawah Island and eight years later at The Country Club in Boston.

There is a common factor in play here. In those matches – and again this year – the Americans had failed to win any of the previous three contests. That is not a coincidence. Desperation to win at the end of a lengthy losing streak seems to have a big influence on the behaviour of those paying to watch.

So it must be said that the stuff we saw and heard last week was not the worst in the history of the Ryder Cup. That “honour” still belongs to 1999, when the treatment of the European players on the final day – particularly Colin Montgomerie – was offensive beyond belief.

And, let’s face it, things could still get worse before they get better. Can the Ryder Cup’s first on-course punch-up be next on this increasingly unappetising agenda? Let’s hope not. But the most recent signs are not good.