Johnson column: The fight to find a cure for Ryder Cup-itis 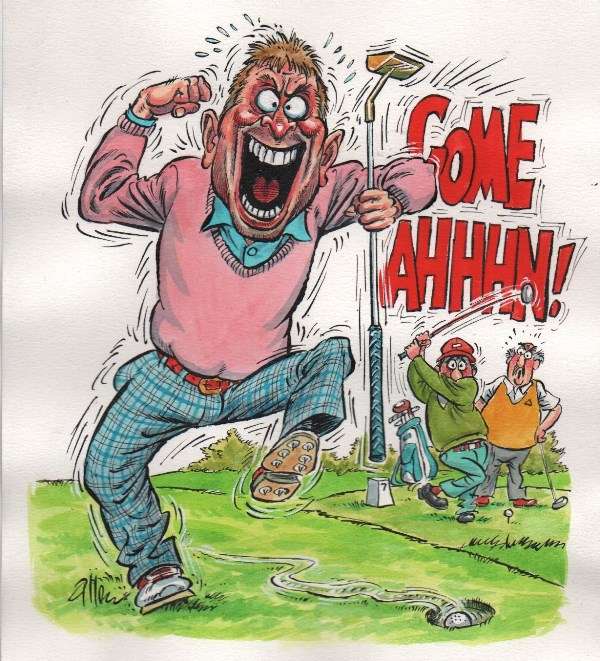 The putt wasn’t particularly difficult, about eight feet and straight uphill. Nor was it an especially important match, just the usual social four-ball, with the losers getting the drinks.

But when the ball disappeared into the hole a strange feeling came over me, and I was powerless to stop it happening. My eyes popped out of their sockets, I started thumping away at my chest with a clenched right fist, and the involuntary noise that came out of my mouth apparently shattered a couple of glasses back in the clubhouse bar. “COME AHHHN!!!”

Furthermore, when a member of the group on an adjacent tee shouted across: “I say, would you mind not making such a din on my partner’s backswing”, I gave him a withering glare and raised my right index finger to my lips. It was a perfect example of the Patrick Reed “ssshhh”, only ­delivered with slightly more feeling.

I have been reassured by doctors that what has been diagnosed as Ryder Cup-itis will eventually clear up, but this appears to be a particularly virulent strain. Later in the round, after bagging a rare birdie, some inner demon made me incline my head to one side and cup a hand to my ear in mock acknowledgement of the deafening silence. Not that there was a crowd that could have applauded anyway, unless you count a couple of squirrels salting away some winter nuts.

This type of golfing hangover is probably why the PGA Tour of America organised a week’s cooling off after the Ryder Cup, doubtless worried that a straight drive from Boo Weekly at the Safeway Open might see him ride an imaginary bucking bronco down the first fairway. All to the ­accompaniment of the kind of whooping and hollering that only surpasses Ryder Cup levels at Donald Trump rallies.

Things will be a lot quieter, one ­imagines, later in the PGA Tour season and by the time we get to the Waste Management Phoenix Open in Scottsdale, Arizona or the Franklin Templeton Shootout in Naples, Florida, it might just be possible for Jordan Spieth to hole one of his trademark 25-footers without appearing to have had his underpants invaded by a colony of hornets.

In regular PGA tournaments, ­American golf galleries behave almost     normally, if indeed you can describe cigar chomping halfwits shouting “Go In The Hole!” and “Mashed Potato!” every couple of minutes as normal behaviour.

And by comparison with the Ryder Cup,  the Americans’ other big international  matchplay event, the Presidents Cup, is the equivalent of a meeting of the local Rotary Club, where the guest speaker is happily allowed to perform in a mashed potato-free zone, and the audience confines its comments to the occasional “hear, hear.”

Mind you, if there is one thing that remains the same at every American golf tournament it’s the decibel level. No-one seems to be able to put their finger on why Americans possess voices that can break greenhouse            windows at 20 paces, but my own theory is that it’s the result of old Wild West ­settlers parking the wagons too far apart when they set up camp for the night. Coupled with their legendary dislike of walking anywhere.

Ergo, when one of the wagons ran short of provisions, someone would shout, loudly enough to be heard above a hooting owl or a cowboy strumming Home, Home On The Range: “Hey, anyone out there got some beans to spare?!”

What it is with American golf ­galleries? No matter how many over par they might be in the Coors Light or ­Budweiser department, why does the relatively mundane business of someone hitting a small ball with a stick induce the kind of noises that General Custer heard coming over the horizon at Little Big Horn?

Poor old Monty copped it more than most in America, because he made it pretty clear from the outset – and indeed said so on occasion – that he didn’t much care for their spectators.

Actually, Monty didn’t much care for spectators anywhere in the world as it happened, especially if they put him off by doing thoughtless things like ­breathing too loudly, but in the US Monty-baiting almost became an ­official summer sport.

What Monty never grasped was that it’s relatively easy to get golf galleries on your side. A bareheaded Nick Faldo, for instance, would ham it up by tugging at the peak of an imaginary cap, or ­pretending to trip over.

Had he tried to make a career as a comedian, Nick would have ended up playing the harmonica in a Tube station underpass, but the “whoops, I nearly fell over” routine had American audiences laughing so uncontrollably they had to hold on to each other to remain upright.

By way of contrast, a Monty bogey would bring out the full repertoire of stomps, glares and shoulders-hunched trudges, followed by a cry of “keep your chins up, Monty!”, and a delighted whoop when it clearly hit the bullseye.

It was also Monty’s misfortune to be so easily recognisable, playing as he did in an era when American galleries barely knew anyone who wasn’t an American.

You would routinely hear conversations along the lines of the one that I overheard at a US Masters in Augusta, when the New Zealander Michael Campbell flicked a cigarette to one side before taking a shot. “Hey, who’s that guy spoiling that pretty grass?” asked a wife to her husband. “He’s one of those Europeans” came the reply. “All those European guys are smokers.”

Talking of the Masters, the one ­certain way to improve crowd ­behaviour at Ryder Cups in America is to take it to a place where crowds aren’t allowed.

At Augusta, crowds are called patrons, and a patron’s patronage gets swiftly removed if they so much as get caught running on the property never mind shouting “Go In The Hole!” or “Mashed Potato!”

I’m not sure I can survive another Hazeltine, and I’ve now been forced to seek out a cure on the practice range – taking it, not so much the proverbial one shot at a time, as one shout at a time.  I’ve now got the “COME AHHHN!!!” count down to manageable proportions and as soon as I can stop yelling “Go In The Trees!” every time the bloke in the next bay hits one sideways , I’ll be cured.