Etiquette? The American fans don’t know the meaning of the word 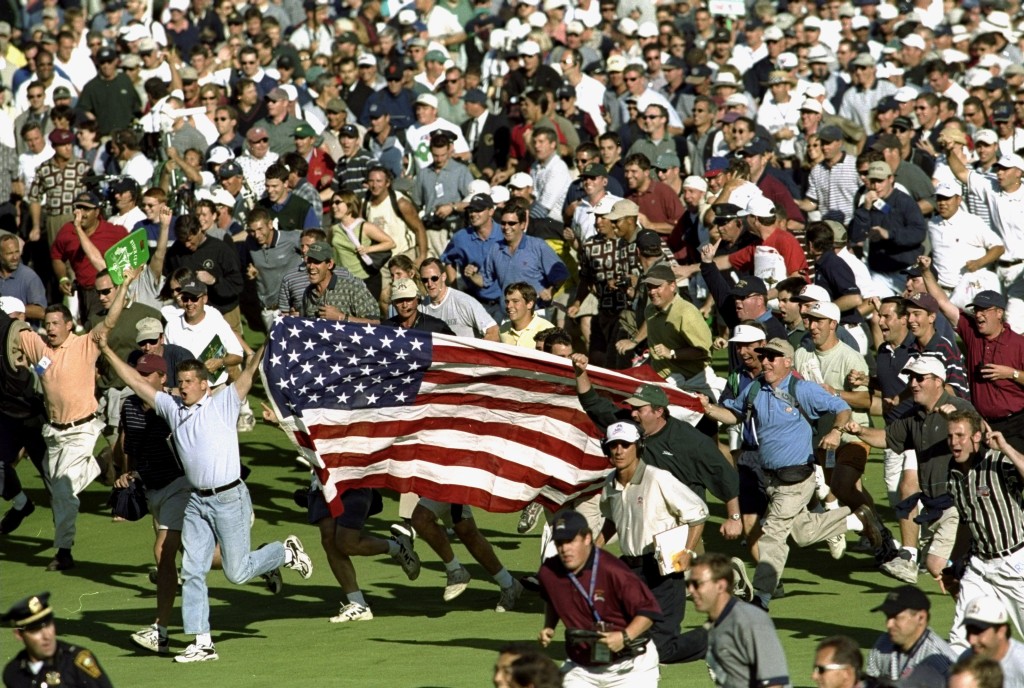 Whooping and hollering: American crowds were the bain of Colin Montgomerie (Picture: GettyImages)

The opponents of capital punishment are nothing if not well intentioned, and many would share their view that the power to decide between life and death should be a matter for the Great Architect alone. No, not Jack Nicklaus (who would probably have designed the planet with much more than two thirds water) but the original one.

However, they might feel inclined to re-examine that opinion were they to attend a golf tournament in America, and listen to some complete plonker shout – no more than a nano second after a ball has left a tee peg at a 600-yard par five – “Go In The Hole!” At such moments the only struggle with your conscience, quite frankly, is whether to cast your vote for the electric chair or lethal injection.

Not many weekends go by without a reminder of the fact that if there is one thing which cements the link between noise and empty vessels, it’s an American golf gallery. They were at it again at the Players Championship at Sawgrass, and while Sergio Garcia got most of the headlines as the butt of their charmless heckling, he wasn’t the only one.

Ian Poulter also copped it, but the suggestion, further fuelled by chants of “USA-USA” in the play-off, that this was in some way down to Ryder Cup jingoism rather fell down when Billy Horschel’s caddie described the gallery following the American as “jerks”. Besides which, before an American spectator can select a European Ryder Cup player as a target for abuse, he first has to fulfil the difficult task of identifying who he is.

I followed Garcia during a round at Augusta some years ago, and he was variously identified as Rory Sabbatini, Mike Weir, Justin Rose and “some French guy”. Likewise, when Lee Westwood was playing in a Masters practice round, a spectator turned to his chum and said: “Hey, who’s that? He looks kinda familiar.” Whereupon his friend replied: “Dunno. I’ve an idea it’s Tom Pernice. But it could be Fred Funk.” So Garcia can at least feel flattered that they now know him well enough to shout “get lost Garcia!” as opposed to “hey, whoever you are, go boil your head!”

One European golfer the Americans have never mistaken for anyone else is Colin Montgomerie, who is currently gushing on about his new lovey-dovey association with them now he’s on the seniors’ circuit, but, as we all know, it’s only a matter of time before a mobile phone going off on his backswing returns the relationship to its former state of mutual loathing.

In a country that is constantly firing guns, mostly at defenceless animals, Monty was a big-game trophy just waiting to hang over the sitting room fireplace. “Hey Monty!” someone would shout as he stomped off the green with a bogey. And when Monty made the mistake of turning to trace the voice, he’d get: “Keep your chins up!”

Monty was never cut out to play golf in America, largely because of a pair of ears so sensitive that believers in re-incarnation are convinced he must have been, in a former life, a bat. The contents of his will are, of course, a matter between him and his solicitor, but in the interests of medical research, and the potential for discovering the world’s most sophisticated radar system, it would be a nice gesture if he left his ears to the Ministry of Science and Technology.

One of the most celebrated stories of a golfer being oblivious over a shot involves Joyce Wethered during the English Women’s Championship at Sheringham, when she was asked afterwards how she’d managed to block out the noise of a train roaring past during the holing of a crucial putt.

Joyce’s reply of “what train?” would have been echoed by Monty in similar circumstances, albeit with a tad more embellishment. “What train? What? What train? What bloody train? The half past two from Cromer, that’s what train it was, and I’m not impressed.”

Monty’s ears picked up everything, and the fact that playing in America made the sounds appear to come from one of those amplified boom boxes made it less than his favourite place. During his third round at the US Open in 2001 at Southern Hills there was a priceless moment when Monty hit a club golfer’s duff at a par three, with his ball finishing 20 yards short of the green, and as he bent down to pick up his tee peg, a spectator shouted: “Great shot Monty!”

Monty glared into the crowd to identify who was responsible, and paused for quite some time while his brain computed whether the punter had merely mistaken the quality of his strike, or was being deliberately sarcastic. And once he’d decided upon the latter, a tee peg, propelled far more fluently than his ball, pinged neatly off the punter’s forehead. “And he can’t work out why we don’t like him,” muttered the spectator when Monty had gone, which was spot on. Monty never learned the trick of how to endear himself to American galleries, as Nick Faldo did for example.

Faldo was as po-faced a golfer as ever lived, and yet by pretending to trip up as he left a green after a birdie, or tugging an imaginary cap, the spectators’ hysterical laughter suggested they believed him to be a cross between Bob Hope and Charlie Chaplin.

But if we get irritated by all their whooping, hollering, and go in the hole-ing, then they themselves get brassed off with the pious way we constantly carp on about it. Which is why I was given a hard time on a Chicago radio show after Brookline in 1999 when I offered the opinion that when an entire nation believes that World War II was won by John Wayne, it can hardly be blamed if its ignorance also extends to golfing etiquette.

On reflection, they were right to take me to task, and I don’t mind admitting now that an apology is long overdue. Of course, the Americans don’t believe John Wayne won World War II all on his own. Let’s face it, he could never have pulled it off without Tom Hanks.