Me and my Golf: ex-gunner and England striker Ian Wright 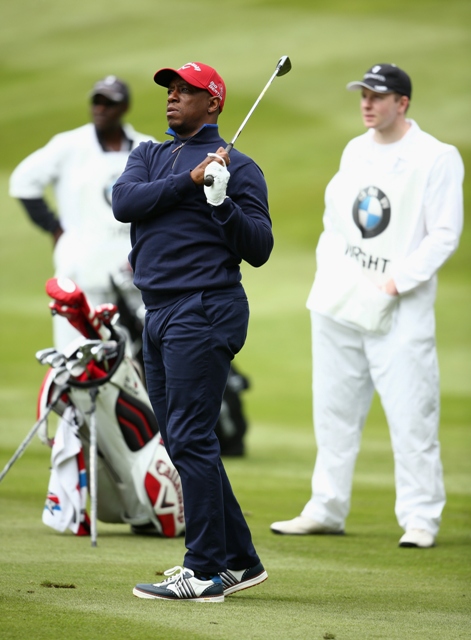 Ian Wright: during the Pro-Am ahead of the BMW PGA Championship at Wentworth (Picture: gettyimages)

For most modern day footballers, golf is a much adored past time. Time spent out on the course provides a tranquillity that simply cannot be found in the furnace of the Premier League.

But former England and Arsenal striker Ian Wright did not hold a club in his hands until after he brought the curtain down on his playing career in 2000.

“I actually took it up after I stopped playing football because I do not believe that you can play both and be serious about them,” Wright explained after playing in the Pro-Am at the BMW PGA Championship at Wentworth. “But since 2000, I have not looked back.”

As a footballer, Wright was passionate, emotional and fiery and he has no apologies to make for it because his lively personality also turned him wanted by TV.

His unrivalled desire to succeed was what took him from Non-League Greenwich Borough to signing professional terms with Crystal Palace at the age of 21 in 1985. Six years and 117 goals later, Arsenal spent a then-club record £2.5 million to add him to their ranks.

But golf provides Wright with a different set of rules to abide by now, and it is a challenge he relishes.

“I really like how measured, precise and meticulous you have to be in your approach to golf,” Wright said. “In some ways golf is alien to me, but it is also really good for me because I am a person who has always done things by instinct.”

Those conditions clearly provide Wright with an environment to flourish. He is now a member at Loch Lomond and Brockett hall, with a handicap in single figures.

Wright’s favourite golfing memory was Tiger Woods’ cinematic chip shot at the 16th hole on the final day of The Masters at Augusta in 2005.

“There comes a certain time on the golf course where you quite simply have to step up and make shots,” Wright said. “To see him do that, in those surroundings, is as good as it gets.”

Wright also praised Scot Marc Warren, the player he partnered on the West Course on the eve of the European Tour’s flagship event. “It is the care he takes around every shot that is impressive,” Wright said.

“He really impressed me all the way round.

“His short game is great, he impressed me off the tee and he is a top, top man as well.”