Huggan column: The Troon duel will go down in history

Posted on 29th July 2016 by Adam Ellis in Featured, Features, In the Golf Paper | 0 Comments 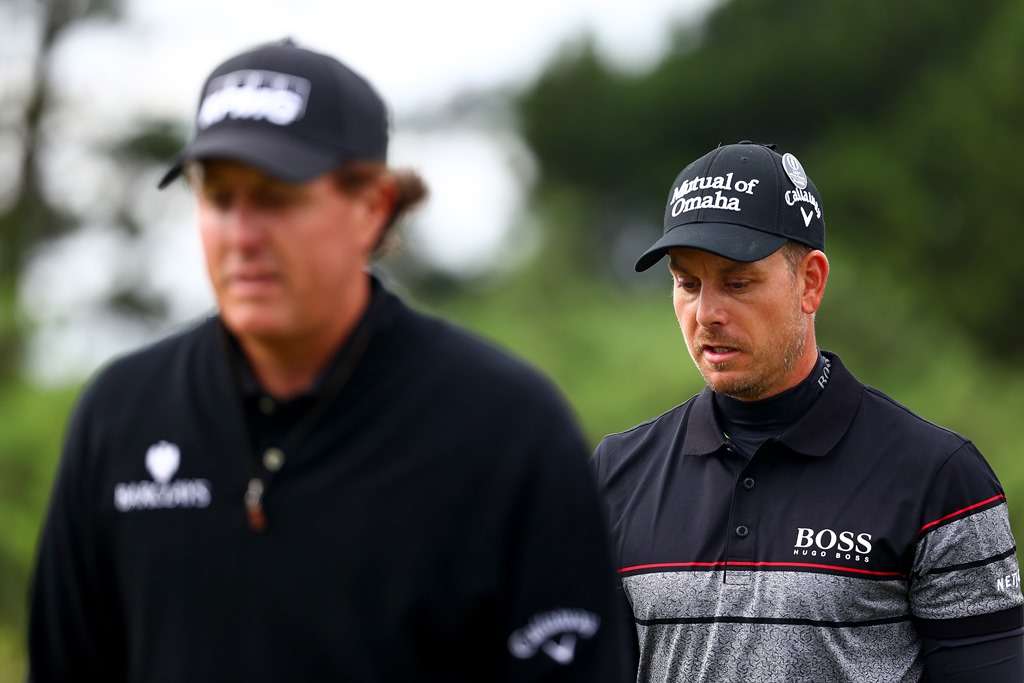 Out of the shadows: Henrik Stenson saw off Phil Mickelson to win The Open after a sensational final-round contest (Photo by Getty Images)

When Henrik Stenson and Phil Mickelson walked off the 18th green at Royal Troon, it must have been clear to both that they had been involved in something just a little bit special. But the details ­apparently escaped them. Stenson reportedly had no idea of his final-round score or that he had just equalled the lowest 18-hole round shot in Major Championship golf, or that his 20-under-par aggregate was the best in relation to par at any of the 145 Open Championships.

As for Mickelson, when the 46-year-old American sat down to check his card, his eyes were drawn to a ­scoreboard on which the pair’s hole-by-hole scores had been recorded. Right along the line he went, nodding as he went to acknowledge the presence of whatever his mind was focused on. When he finished, he turned to Stenson and exclaimed, “you made ten f*****g birdies!”

Such blissful ignorance in each speaks to the intensity of the contest in which Stenson prevailed to make ­himself the “champion golfer of the year”. Totally lost in their respective quests to win, both men were able to divorce themselves from anything and everything the rest of the field may have been doing. All of which only added to the purity and extraordinary quality of their epic duel.

Not surprisingly, the reaction from the world of golf has since been one of universal praise. This was a battle for the ages, an unforgettable moment in time that will live on for as long as men and women use sticks to hit little balls around fields and into small holes. But no one can better appreciate just how good it was than those who have ­experienced victory at the highest level of the game: Major champions.

“The aura of this Championship won’t wear off,” says Tom Watson, five-times Open champion and winner of the “Duel in the Sun” with Jack Nicklaus at Turnberry in 1977. “It’s there. It’s always going to be there. People, when they talk about The Open, they will say, ‘yeah, Stenson-Mickelson at Troon’. They will always talk about that in the highest echelon of conversation about The Open Championship.

“Some in the media have already tried to compare today’s final round to 1977 at Turnberry. I thought we played great and had a wonderful match. On that day, Tom got me, 65-66. Our final round was really good, but theirs was even better.”

Heady praise indeed, especially when one considers the sources. But Jack and Tom were far from alone in feeling in awe of what they witnessed. A host of Major winners were just as impressed.

“It was the best duel I have ever seen,” said 1986 USPGA champion Bob Tway. “The quality was unbelievable. You just don’t separate yourself from the rest by that much. For me, that was the most impressive part of it all.”

“They fed off each other,” chimes in 1988 USPGA winner Jeff Sluman. “I bet they never looked at anyone behind them. They reached the stage where the difficulty of the holes and the course became irrelevant. They clearly had no idea what they were shooting. It was ­fascinating to watch that aspect of it all.”

Yet another USPGA champion, 1996 winner Mark Brooks, paid tribute to Stenson’s perseverance in coming back from two massive slumps during his career, as well as the loss of millions of dollars in the Stanford financial ­scandal.

“Henrik clearly has great belief in himself,” says the Texan. “But Phil has no need to feel bad about anything. He did everything he could – and then some. His only disappointment would be that Henrik made so many putts. Of course, he’s done just that himself to a lot of people over the years.”

One who spent the weekend “glued” to the television was Roger Chapman, winner of the US Senior Open and the US Senior PGA ­Championship in 2012.

“I was reminded of 1977 at ­Turnberry,” said the Englishman. “That was my first Open as a player and I remember thinking to myself, ‘what am I doing playing golf when guys can ­perform like that?’ I also thought we would never see anything like that again – but now we have. And this time it was even better.”

“We have waited a long time for this,” he said. “I had a lot of close calls and the Swedish females, of course, have spoiled us in the Majors. I actually think your man in the street in Sweden ­probably didn’t know that we hadn’t done it before, so didn’t actually realise how big it is.”

If true, that’s a shame. Because everyone else certainly did.