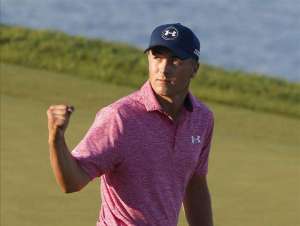 Jordan Spieth is targeting at least one major next year after a sensational 2015 in which he bagged two of the sport’s top prizes.

The 22-year-old announced his arrival on the scene when finishing in a share of second place at the 2014 Masters but he went one better this year with his first Green Jacket at Augusta.

Just a couple of months later, the Texan was back in the winner’s circle as he landed the US Open on the tough Chambers Bay course.

The likeable youngster came close in the other two majors as well, with a joint-fourth place finish at the Open while he was runner-up at the US PGA Championship.

The world number one looks set for a battle with the likes of Rory McIlroy and Jason Day over the next few years and admits that he has set himself similar goals to the Northern Irishman.

“I don’t know if it is realistic to raise the bar in 2016 given what I have achieved in 2015 but I am sure it will be very close as I am always trying to get a little bit better,” he told Sky Sports.

“It would be good if I could repeat what I have accomplished this year next season but whether or not that happens, my goals for the new year will certainly include having multiple tournament wins.

“I would expect to at least win a major championship and it’s exactly what Rory’s been saying, that even in an off-year you want to be at least close to winning a major.”